Will & Grace‘s Jack McFarland and Grace Adler are back — sort of. Sean Hayes has joined the cast of NBC’s Smash. Once again, he’ll rub elbows with his former co-star, Debra Messing. 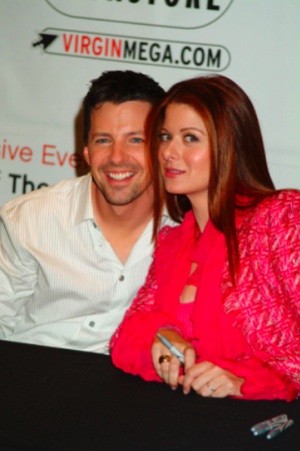 Sean Hayes and Debra Messing are together again. The hilarious duo that co-starred on Will & Grace for eight seasons (1998 – 2006) are back on NBC.

Hayes is set to appear on the upcoming second season of Messing’s new show, Smash. Producers are playing the nostalgia card by bringing him in for a multi-episode arc.

According to The Hollywood Reporter, “Hayes will play Terrence Falls, a comedic TV and film star who is making his Broadway debut in the musical Liaisons, based on the novel Les Liaisons dangereuses. However, due to a series of comedic circumstances, he becomes a thorn in the side of Megan Hilty’s Ivy and other characters.”

Smash is pulling out all the stops for its sophomore outing. After a bumpy first season, they’ve decided to kick it up a notch. Aside from Hayes, other notable additions include Jennifer Hudson, Broadway’s Krysta Rodriguez, Andy Mientus and Jeremy Jordan.

During its hiatus, the musical received a serious makeover. The network hired new showrunner Josh Safran (Gossip Girl) and cut a chunk of its cast. In other words, they got rid of the dead weight. Over the past few months they’ve lost stars Brian d’Arcy James (Frank), Jaime Cepero (Ellis), Raza Jaffrey (Dev) and Will Chase (Michael Swift).

With all these changes, will Smash fare better or worse this season? Only time will tell.

What do you think of Sean Hayes appearing on Smash?