Ask Jean-Claude Van Damme a direct question and you’ll get a stuttering answer — followed by some sexy details! Did he hook up with Kylie Minogue while filming Street Fighter decades ago? You’d better believe it. 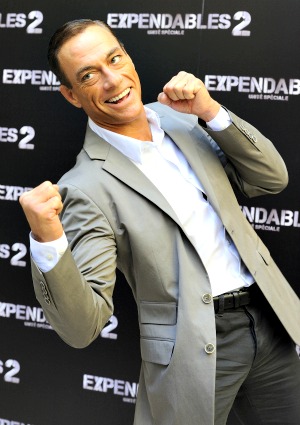 Jean-Claude Van Damme not only hooked up with Kylie Minogue while filming 1994’s Street Fighter, he says it would have been “abnormal” not to! There’s pride in Van Damme’s shagging, for sure.

Out promoting The Expendables 2, Jean-Claude Van Damme got put in the hot seat about former costar Kylie Minogue. Thanks to The Guardian‘s inquisitive nature, we now have both confirmation and some deed details to share!

“Oh … who said that to you?” the 51-year-old shot back when questioned about having a fling with Kylie Minogue, trying half-heartedly to play it cool. “I tell you what, you should ask her. She’ll have a better memory.”

Feigning forgetfulness, he went on to explain, “I’m 51 years old, do you know how much I was punched in the face on The Expendables? No, no. No. And let’s just say it happened, so what? Who wants to know?”

Rather than shrink back in front of the accomplished martial artist, the reporter explained the need to verify facts before going to print. Who could have known the hookup floodgates would then open?

“Sometimes you let go of stuff … I don’t know, maybe,” Jean-Claude Van Damme then continued, softening his tone considerably. “Yes. OK. Yes, yes, yes. It happened. I was in Thailand, we had an affair.”

“Sweet kiss, beautiful lovemaking. It would be abnormal not to have had an affair, she’s so beautiful and she was there in front of me every day with a beautiful smile, simpatico, so charming, she wasn’t acting like a big star. I knew Thailand very well, so I showed her my Thailand. She’s a great lady.”

No comment yet from Kylie Minogue on having her decades-old secret just now making headline news!

Are you surprised to hear Jean-Claude Van Damme was shagging Kylie Minogue back in the day?