It appears Lifetime is finally debuting a smart and intriguing series, by way of The Week the Women Went. The TV series asks: What would happen if all the women in town were to leave the men (and children) behind to fend for themselves? Let the chaos ensue! 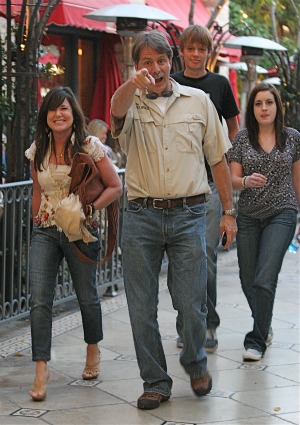 Narrated by “You Might be a Redneck” comic Jeff Foxworthy and set to debut Tuesday, Lifetime is calling The Week the Women Went a “daring social experiment” that “dives deep into the gender gap issue.”

The network is bringing this social experiment to life in a truly daring way, by literally removing more than 100 women, aged 18 to 82, from Yemassee, South Carolina.

Located near the southern tip of the state, Yemassee is home to just 1,000 people, so you can imagine how the removal of the women puts the tiny hamlet in a tailspin to begin with.

The women are essentially shipped off to, in all likelihood, a much-needed vacation — a resort reportedly located on Florida’s Amelia Island.

The men are left to fend for themselves and the children.

According to a local paper, The Island Packet, the show features families like the Taylors.

When Tracy left for her “forced vacation,” she and her husband, Darnell, had barely spent a night apart and never vacationed without their two young kids.

Darnell actually had to enlist his friend, Doug, to help out for the week.

Problem was, Doug had his own year-old twins — adding to the fathers’ stress and the producers’ delight.

In addition, the town is said to be a big “pageant community,” so you can only imagine how all the big hair and glitzy dresses went over with the dads.

No doubt, the fact that the town is big on its pageants (reminiscent of another reality TV program — Toddlers and Tiaras), made it all the more attractive to the brains behind the show, who apparently selected Yemassee after interviewing dozens of locals and eliminating two other finalist towns.

It’s certainly an intriguing storyline that has already proved successful when the concept first debuted in England on the BBC, according to The New York Times.

In seven years, the series has spanned a number of other versions in more than a dozen countries, including Morocco, Germany and Norway.