On Monday morning, Miley Cyrus was the talk of Twitter — her hair, that is. The former Disney star’s decision to chop her once long, auburn locks appears to be more polarizing than her engagement at age 19 to actor Liam Hemsworth. 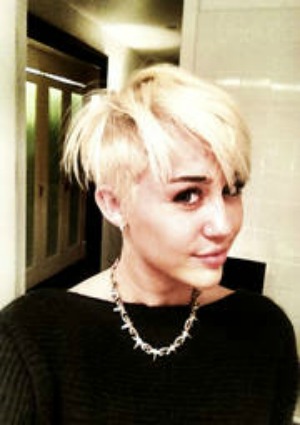 Miley Cyrus spawned “Pixiegate 2012” after posting photos of her new ‘do Monday morning — to both the adulation and the hate of millions of followers on Twitter.

In fact, the most-talked-about cut spurred its own Twitter account, “Miley’s bun,” which had an unbelievable 22,900-some followers as of Monday morning.

“Miley’s bun” pays homage to Instagram photos documenting the minutes leading up to the final cut, featuring the ex-Disney star’s locks piled on top of her head before stylist Chris McMillan lopped it all off.

Tweeps went into freak-out mode before the locks got gone.

“OMG MILEY NOOOOOOOOOOOOOO,” and “FOR THE LOVE OF JESUS NO,” represent some of the most horrified tweets (you can always tell the level of horror by the number of extra “O’s” in “No” and over-use of the caps lock).

After the deed was done, the hate ensued:

“In case you missed it, Miley Cyrus butchered her hair this weekend so at least you’re probably having a better Monday than her!”

Miley, who has inherited the Cyrus family’s “Twitter TMI” gene, responded to the haters with: “my dad @billyraycyrus used to tell me “opinions are are like a** holes every body has one”

She went on to say, on more than once occasion, essentially the same thing: “LOVE my hair … feel so happy, pretty, and free.”

Her fans also contend that the newly engaged star gave her locks to a cancer charity.

Another fan also reminds us that, way back in 2008, Miley yearned to have a “short, blonde, Twiggy-style cut.” Mission accomplished!

The Buzz – Miley Cyrus: ‘Opinions are like a** holes, everybody has one’
Miley Cyrus took her hairstyle one step further, chopping it into a pixie cut, but she doesn’t care what anyone else thinks!

What do you think of Miley’s drastically different look?