Brad Pitt and Angelina Jolie’s friends are in town for a private party this weekend, but word is out that the event will be much more. 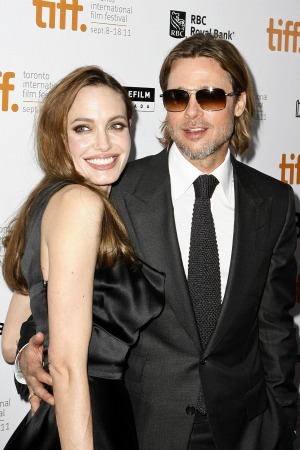 Brad Pitt and Angelina Jolie may have thought they were being sneaky when they announced “private party” at the French estate this weekend. But the newly-engaged couple is rumored to be tying the knot this weekend.

“Guests, including Brad’s parents, have arrived at the chateau ahead of the bash, to be held at Chateau Miraval this weekend,” said Lizzie Smith with the Daily Mail. “Jeweler Robert Procop, who made Angelina’s $250,000 diamond and platinum engagement ring, is also thought to be in attendance.”

The couple was only engaged in April, but they have been together for seven years and have six children.

Brangelina originally said they would not be getting married until same-sex marriage was legalized in the United States, but said they changed their mind when their children urged them to.

The estate houses a small chapel, which is where the media is speculating Pitt and Jolie would be married. But as for town officials, they said they have been left in the dark.

“We don’t know anything about it,” Patrick Mareschi, Deputy Culture Secretary of the nearby village of Correns, told Reuters.

And this may pose a problem. But for the couple, who has never done anything in a normal way, this ceremony could be just that – ceremonial.

“Under French law, couples have to get married at the Town Hall. Unlike with a religious wedding, there’s no way a couple can hold a civil ceremony at their own home,” Mareschi added to Reuters.

Since the couple was engaged just a few months ago, the town has been abuzz with rumors the wedding could take place at the home this summer.

After the couple was engaged, the reception hall at the estate was said to be under construction, according to the Daily Mail, which could be a sign the wedding will take place there.

The party is said to be for Pitt’s parents, but if it turns out that it is a wedding, it will be a full family affair.