Lindsay Lohan apparently thinks the whole world belongs to her. The actress had a meltdown on Tuesday night when she spotted Francesca Eastwood in a Hollywood club. 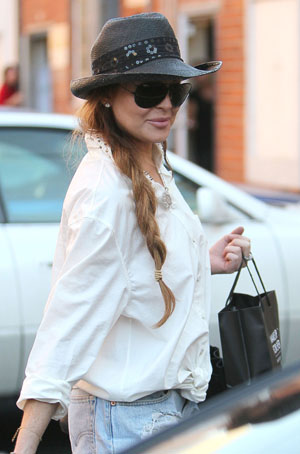 Oh, how cute. Lindsay Lohan still thinks she’s an A-list actress. The troubled actress reportedly tried to get Clint Eastwood‘s daughter, Francesca Eastwood, kicked out of Bootsy Bellows on Tuesday night, according to US Weekly.

“Francesca was celebrating her birthday with around a dozen friends in a private area when Lindsay came over and started screaming that Francesca should leave,” an onlooker told the magazine. “She was yelling, ‘I’m a star, she’s a nobody, get her out of here!'”

Someone doesn’t have an ounce of self-awareness, does she?

“One poor guy came over and tried to calm [Lindsay] down, and she acted aggressively,” the source continued. “At that point the security told her to leave, and it was totally embarrassing. She is acting like some bad ’80s film star, and it is hard to watch because she needs help.”

We have to wonder if there’s some lingering bad blood between Eastwood and the Liz & Dick actress. Maybe Lohan has a crush on Eastwood’s boyfriend, photographer Tyler Shields? That’s about the only thing we can figure it’s about. Oh, and this isn’t a whole bunch of manufactured malarkey. Shields and Eastwood told E! News that the incident did happen — and they don’t know why it happened, either.

“We were celebrating my girlfriend Francesca’s birthday at Bootsy Bellows, and it was a blast,” Shields told the network. “Suddenly, there was a burst of chaos, and as quickly as it started, it was over. After the fact, we were all a bit confused about what just happened.”

Eastwood doesn’t have any ill will toward the actress, either.

“I’m not sure what exactly sparked Lindsay’s outburst,” the blonde stunner added. “Regardless, I still had an amazing birthday, and Parent Trap is still my favorite movie.”

Lohan doesn’t hate everyone in Hollywood, though. The 25-year-old loves to hang out with people who can help advance her career, like Lady Gaga and, apparently, Kristen Stewart. The pair was reportedly spotted hanging out together at a house party in Orange County, California, on Thursday night, according to X17 Online.

A bit of advice, Lindsay: We wouldn’t upset Clint Eastwood if we were you — have you seen Dirty Harry? Exactly.