Insane Clown Posse — the Detroit rappers responsible for the Juggalo movement — is suing the FBI for categorizing their followers as a gang. Oh, this is gonna be good. 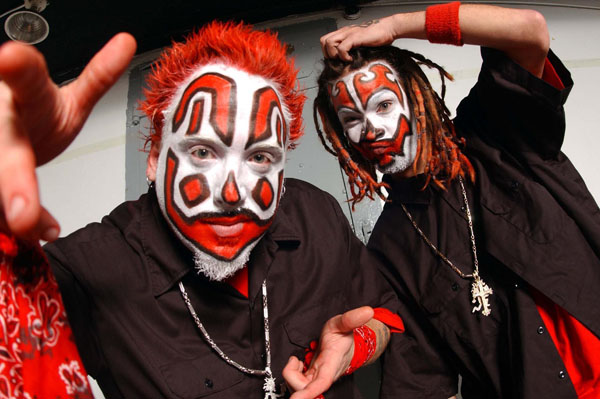 The Juggalos might gather together at an annual celebration of crappy rap music and hedonism, but does that make them a gang? Yes, according to the FBI. The federal government’s most powerful law enforcement agency classified them as a “hybrid gang” in its annual National Gang Threat Assessment report.

The “leaders” of the Juggalos — the Insane Clown Posse — are not too happy with that moniker. They’re so unhappy that they’re working on a lawsuit against the FBI, according to an announcement they made Friday afternoon at the annual Gathering of the Juggalos in Cave-in-Rock, Illinois.

ICP was inspired to start the lawsuit after a New Mexico-based Juggalo was placed on the state’s Most Wanted list for self-identifying as a member. The duo feels this means Juggalos will get excessive jail time for small charges.

MC Hammer is a Juggalo, too >>

We see their point here. Juggalos might be annoying and out of control when they’re together, but they aren’t staking out claim on street corners and killing ordinary citizens, a la real gangs like the Crips and the Bloods. The group has also launched a website, Juggalos Fight Back, to help Juggalos who feel like they’re unfairly targeted for listening to that type of music.

“When they made that list, stores like Hot Topic stopped carrying our s***, because they don’t want to be selling gang apparel,” ICP told Noisey, adding that the staff at their record company has been affected, too.

“That’s their career now,” he said. “They have kids and wives and husbands. Next thing you know, they’re working for a gang.”

“ICP is going to do something huge for our fans, and the world,” the group said in a statement. “We’re suing the FBI to be taken off their list. They’re trying to kill our band, and we have to fight back.”

Should the FBI lay off Juggalos and the Insane Clown Posse, or are they actually a gang?