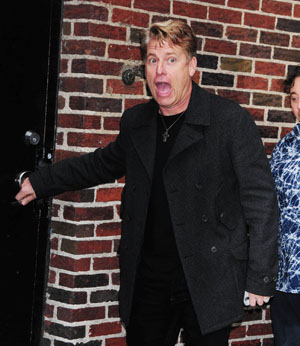 Wow, we never saw this one coming: Joe Simpson — best known as the dad who commented on his daughter Jessica Simpson‘s huge breasts — was arrested on suspicion of DUI last weekend in Los Angeles, according to E! News.

Papa Joe was arrested around 10 p.m. on August 4 on Ventura Boulevard in Los Angeles. No word on his blood alcohol content, though — the LAPD hasn’t released a mug shot or any other information related to the arrest.

The pastor is best known for controlling the careers of his daughters, Jessica Simpson and Ashlee Simpson. He’s been portrayed as sort of a Svengali that leeches off his daughters for money, but he said that’s definitely not the case.

“The media says that I try to plan everything — if I had half of the power they give me… They [Ashlee and Jessica] don’t call me and ask me. They call me and tell me,” he said in 2008.

One thing he might have taught his daughters? A love of booze. Jessica told Elle that she was reluctant to give up her alcohol when she found out she was pregnant.

Her choice of drink these days is water. “Responsibility has drastically changed my life! Saturday night drink of choice… WATER! :)” she tweeted last weekend, ironically around the same time her father was arrested.

Is reality TV the kiss of death for marriage? >>

Maybe she needs to give dear ol’ dad a bump of water, too?

What we want to know: How did it take six days for us to hear about this? Normally arrest news hits the interwebs immediately after they’re cuffed. You’re slipping, TMZ.