First Joan Rivers went a few rounds with Costco over her book, and now the ADL is all over her case! The controversial author is no stranger to “deeply offensive” material, but insists she knows full well about the Holocaust thanks to her family’s personal history. 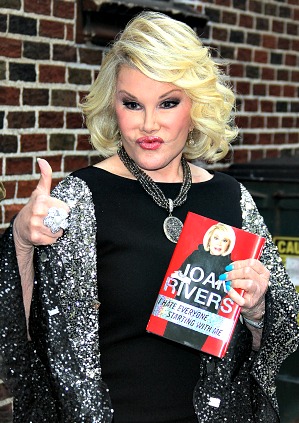 Joan Rivers is now battling the Anti-Defamation League (ADL) over her latest book, I Hate Everyone … Starting With Me. What started with the Fashion Police host comparing Costco to Nazi Germany has now turned into a battle over who’s allowed to say what about the Holocaust.

On Aug. 7, Joan Rivers handcuffed herself to a shopping cart in an act of protest at a Costco store in a Los Angeles because of their decision not to sell her book. In an interview with KTLA the 79-year-old vented, “People should have the right to have the literature they want. This is the beginning of Nazi Germany.”

Taking offense to her comparison, the ADL issued a statement Friday from Abraham H. Foxman, the group’s National Director who also happens to be a Holocaust survivor:

“While Joan Rivers may be right in criticizing Costco’s decision, there is simply no comparison between a private company’s choice not to sell a book and the policies of the Nazi regime that engaged in the systematic persecution and slaughter of millions of Jews and others during the Holocaust.

Such comparisons only serve to trivialize the Holocaust and are deeply offensive to Jews and other survivors, as well as those Americans who fought valiantly against the Nazis in World War II.”

Never one to shy away from a showdown, Joan Rivers had a few choice words for the ADL in return.

“My husband lost his entire family in the Holocaust,” she ranted to TMZ. “My comment reminds people of the Holocaust because half the people now don’t even believe it ever happened.”

Refusing to back down from her Costco comparison, Joan Rivers forewarned, “Germany is where banning books started, and it can start here just as quickly.”

Do you agree with the ADL that Joan Rivers went too far comparing Costco to Nazi Germany?