A week after Amy Winehouse’s ex was rushed to the hospital, her dad, Mitch Winehouse, is tweeting that Blake Fielder-Civil will “get through” the coma doctors induced following a drug-fueled bender. 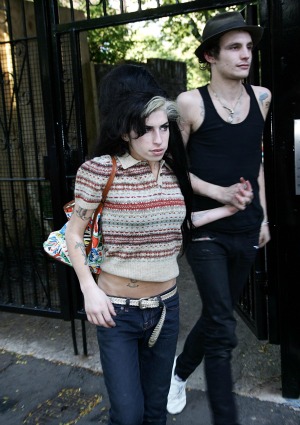 The day after Mitch Winehouse announced the “terrible news” about his former son-in-law, and asked that Amy’s fans “pray for his recovery,” the father of late singer Amy Winehouse had good news to share about Blake Fielder-Civil.

“It looks like Blake is going to get through this,” he tweeted Friday morning.

Blake’s girlfriend, Sarah Aspin, told the Daily Mail that the 30-year-old “keeps waking up” from the medically-induced coma.

“I know he is going to pull through,” she said.

It was Aspin who reportedly found Amy Winehouse’s ex-husband shortly after he staggered home following an alleged drug-fueled binge.

Paramedics later told Aspin that Civil had choked on his vomit, and that his left lung was failing.

Doctors later put Civil into a medically-induced coma; Scientific American notes that by “shutting down function,” the brain is given “time to heal without the body performing radical triage by shutting off blood flow to damaged sections.”

It’s been widely reported that his relationship with Amy was rocky at best.

The couple split two years after their marriage in 2007.

What comes as somewhat of a surprise is Mitch’s call for prayers.

After all, in his book, Amy — My Daughter, he blamed Blake for the drug addiction that ultimately led to the star’s death just over a year ago.

“I am not supporting Blake but I am praying for his recovery,” he wrote.

A longtime heroin addict, Blake has reportedly been inconsolable about Amy’s death, and the binge that led to his being put on life support came within weeks of the one-year anniversary of his ex-wife’s death.