Bobbi Kristina’s Whitney Houston tattoo is making a statement in honor of her late mother — but who does that other wrist belong to? The ink twin revealed! 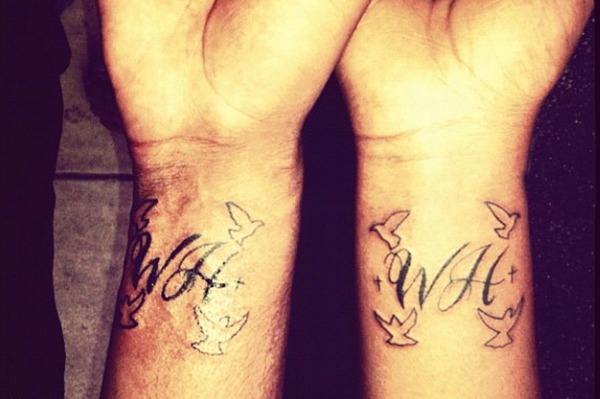 The 19-year-old, who lost her mother Feb. 11, continued, “we love you @nickdgordon always&forever{possible fiancé. The pair are reportedly now “living like a couple” in Atlanta.

Jordin Sparks: Whitney wasn’t afraid of her past >>

Bobbi Kristina later went on to tweet a request for her followers to get Whitney Houston’s name trending in the news. “TREND#HAPPY49thBIRTHDAYMOMMY STARTS AT 12 am eastern time ! so TREND TREND TREND! rip mommy,” she wrote. “Oh how Iloveuso; I’llNEVERLetUGO.”

Bobbi Kristina Brown has also reportedly penned the letter below to her later mother:

Mom, I know that making the movie Sparkle meant everything to you.

You always told me and Nicholas and the family, “This is for you, this is for us, this is for the family. This is for you Bobbi Kris.” You told me that all the time. I’m so proud that you were able to finish making Sparkle before things happened. You did it for us. Mom, you had such a great time making the movie. You glowed throughout…you just glowed.

My mother being so happy was an absolutely beautiful thing for me to watch. I’m very proud of you.

Fans curious for more on what life is like now for Bobbi Kristina and Nick Gordon may soon get an eyeful. Before heading out to their tattoo appointments, the 19-year-old tweeted, “You all will get2see! No worries 🙂 we’ll show you & so will our #Realityshow ! #TheHoustonChronicals !make sure you look out for it nxtyr!”