He’s not the most famous and certainly not the hottest celeb onscreen, but Zach Galifianakis may just be the funniest. With The Campaign opening tonight, in which he stars as Will Ferrell’s Republican foil, the charmingly chubby comedian is primed to win us over once and for all. 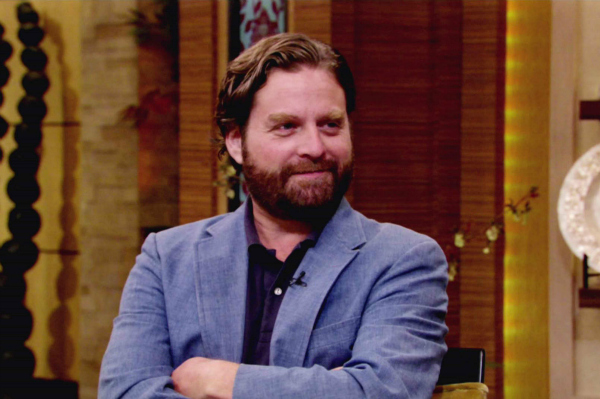 After bailing on college one class shy of a degree, Zach fled to New York where he got his start doing gigs in the back of a Manhattan hamburger joint. Sure, he now reads scripts with Hollywood heavy-hitters, but he still favors his own grungy, underground breed of humor. Fortunately for us, that humor is displayed as prominently as his questionably full facial hair in the web series Between Two Ferns with Zach Galifianakis, on which his awkward interactions with fellow celebs include being b****slapped by Bradley Cooper and called a chubby garden gnome by Charlize Theron.

We all had that friend in high school… the one who hid behind a razor sharp wit in an effort to camouflage a soft belly or some other insecurity. Hell, some of us were that friend. But as funny as we found our sophomoric slapstick to be, nobody makes fun of himself with as much flair as Zach. During his stand-up routines, the jokester swills beer while serving up a steaming plate of self-deprecation. He hurls profanity-laced insults at himself, pokes fun at his portly shape, and — how can you not love this? — gets sidetracked laughing at his own jokes.

He was funny before he was famous…

Yeah, you can say his breakout role was Alan in 2009’s The Hangover. But if you IMDb the hairy little dude, you’ll notice his work on film stretches back more than a decade prior to the R-rated hilarity that is The Hangover. Buried amongst the bit parts are little pearls of comedic genius like Dog Bites Man‘s Alan Finger and Reno 911!‘s Frisbee. The 2001 movie Out Cold, my first introduction to the scraggly star, remains my favorite example of Zach’s earlier brilliance… he plays Luke, the narcoleptic Jacuzzi Cassanova who refers to his balls as everything from “the Hardy boys” to “the Olsen twins” and maintains the personal motto “everybody Wang Chung tonight.” Just watch it — you can thank me later.

And even more hilarious now that he’s a household name

He was funny in his earlier stuff, but — hot dayum! — he’s on fire now. Every character he plays turns to gold. Bradley Cooper is fine as hell in The Hangover flicks, and Zach still manages to steal every scene he shares with the stud. How? Zach strikes some subconscious-stealing balance between uncomfortably embarrassing and embarrassingly funny that makes it impossible to break away. After The Hangover, he had enough fans to multiply his wolf pack of one into a ton. Following Dinner for Schmucks, we mocked Therman’s mind control for months. And once we watched him opposite Robert Downey Jr. in Due Date, we wanted to be one of Ethan Tremblay’s 12 pending friends on Facebook.

Really, he’d rather be on a farm in North Carolina

A North Carolina native, Zach owns a mountain house in his home state and much prefers spending time there over going to VIP parties in the Hollywood Hills or dodging teenage fans. Even when he’s on the road, shades of his southern roots surface. After all, Marty Huggins — his laughably daft but endearing character in The Campaign — is a proud North Carolinian. Zach loves the area he often parodies so much so that he ultimately plans to create a completely self-sustaining farm there to serve as a backdrop for a writer’s retreat. Hey, if letting a bunch of writers loose on a rural plot of land leads to roles as frickin’ side-splitting as Zach’s Campaign character, sign us up STAT.