Unlike a certain reality show featuring a certain little boy named “Tripp,” #HoneyBooBoo is trending, which means people are at least watching TLC’s latest abomination — a Toddlers and Tiaras spinoff. Oh, the humanity! 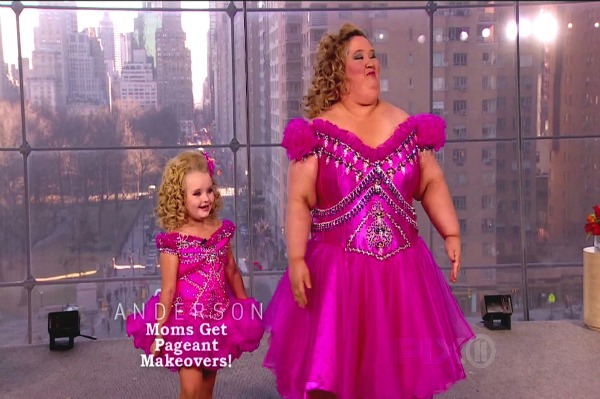 It’s hard to upstage the sassy, go-go juice-swigging Alana Thompson (“Honey Boo Boo Child”) of Toddlers and Tiaras. But we think her over-the-top Georgia family did just that, and it’s prompting critics to call Here Comes Honey Boo Boo “a new low” in TV (Boston Herald) and even a “sign of the apocalypse” (Buddy TV).

3-year-old dresses like a hooker on Toddlers and Tiaras > >

TLC uses a familiar “rednecks as portrayed on TV” formula: Start with grown men and women rolling around in mud pits, insert road kill entrees for dinner and plenty of Daisy Dukes and uninhibited farting.

While it’s a formula we all know well, TLC has people talking — some very famous people, actually.

Country star Miranda Lambert apparently had no shame when she tweeted, borrowing one of Alana’s favorite sayings: “And TLC wins again with another show I am hooked on:) “a dolla makes me holla honey boo boo”!”

Chris Brown, watch out! Miranda Lambert’s got a gun > >

While plenty of critics are deriding the show as a sign of the End Times, Headline News and its “Showbiz Tonight” segment contend people will watch this one because it’s just that bad.

“Here Comes Honey Boo Boo is not the kind of program that hinges on good reviews,” HLNtv reports. “Audiences will watch in droves, maybe because of how terrible it is. As Honey Boo Boo would say to the critics, ‘You better redneckognize!'”

To that end, guess what else Honey Boo Boo has on her side? An over-stressed society inundated with awful news coming from far-off countries or from the business that just fired a bunch of workers down the road.

The last thing people generally want to do when they get home is watch more awful news. They want something brainless, something that gets them away, if only for an hour, from the stresses of everyday life.

Here Comes Honey Boo Boo fits that bill, as does anything on MTV these days.