Misty May-Treanor is causing a stir on the court for her skills and her prominent tattoo. Sounds like she’s riding high right now, thanks to her gold medal win at the 2012 Summer Games. 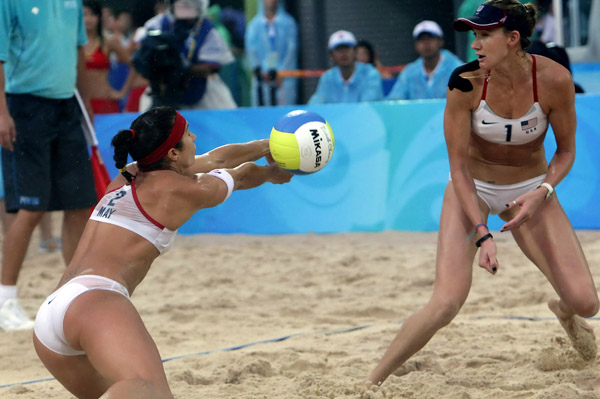 Misty May-Treanor may now have three gold medals, but winning her third on Wednesday during the 2012 Olympic Games is just as sweet as the first. Maybe even sweeter.

“Winning the first gold medal, we were young, sweet, we did it. Winning back-to-back medals is very difficult. To go for a three-peat — I don’t know if you could write the script the way it turned out. But we believed,” the leggy volleyball star told People on Thursday.

The 35-year-old champion and her partner, Walsh Jennings, beat Team U.S.A. colleagues Jen Kessy and April Ross on Thursday afternoon to get the gold medal.

“April and Jen, they fought hard. Of course there can only be one winner, but for us to meet them in the gold medal match, it says a lot about our sport, a lot about the teams up here. I’m happy about the four of us sharing this moment,” May-Treanor said of her teammates and opponents.

Do Kessy and Ross have any hard feelings toward the tattooed baller? Nope!

“Kerry and Misty, hats off to them. They played unbelievable, they were tough to stop and we’re really proud,” Kessy said after the match.

Tearful Lolo Jones: I’m not the Anna Kournikova of track! >>

She won’t be gone forever, though. The volleyball star alluded to a future in the sport. “My mind says it’s time and my body says it’s time, and it’s the right time. I’m not going to leave this sport. It’s time for me to help the next generation.”