Liberty Ross has been spotted with divorce lawyers in L.A. So what’s with the rumors that the actress is staying with her cheating hubby? 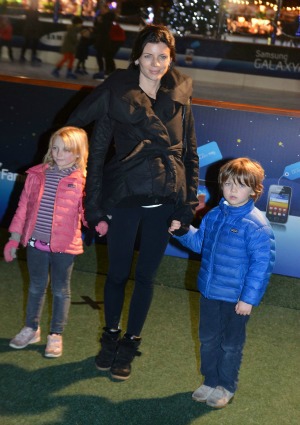 While rarely seen since news of her husband’s affair with Kristen Stewart broke, Liberty Ross was spotted Tuesday at Century City in Los Angeles.

TMZ is reporting Wednesday that the offices are home to many high-profile divorce lawyers, including Linda Wasser.

The sighting comes just days after it was reported Liberty was working it out with her director-husband, Rupert Sanders.

Sanders directed both his wife and Stewart in Snow White & the Huntsman (as icky as that sounds).

In fact, before the big fallout, photos were circulating of a smiling Liberty with her co-star, Kristen.

So is she staying — or going?

Apparently, the gossip site also snapped photos of Liberty and Rupert together (with an unidentified person in-between them, no doubt, as a buffer).

Sources tell TMZ that the photos were taken outside of a psychologist’s office, and that the couple have consulted with marriage and family therapists.

They have two young children together.

Sources also insist Liberty’s meeting with an attorney isn’t what it seems, and that the hope is “reconciliation.”

But Liberty’s not quite ready to put the ring back on yet — at least until she is assured her husband viewed the affair as a mistake he won’t repeat again, insiders say.

To his credit, Rupert (by way of Radar Online) has called the affair “the worst mistake” of his life, and that the thought of losing his wife and children is “killing him.”