The swimmer was caught headed out for a night on the town with an unidentified girl on his lap. Did he follow Michael Phelps to the world of coupledom? 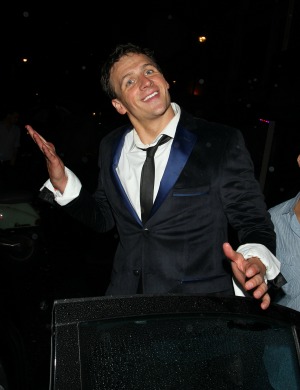 Swimmer Ryan Lochte may find he will be returning home from the Olympics as one of America’s most eligible bachelors. (This all despite his mom’s comments that he only has one night stands.)

So when photographers caught him riding in a car with a woman on his lap, everyone took notice.

The woman was on the lap of the swimmer in the back of the car on their way to a nightclub, along with other passengers in the car.

She was identified as 31-year-old Megan Torrini, and some websites ran with it. According to Buzzfeed.com, the site SportsGrid was one such offender.

“SportsGrid, for instance, had linked Mrs. Torrini and her showy shirt to the swimming star after pictures were released on them goofing around in the backseat of a car with some friends,” said the Associated Press.

But then someone decided to do a little more digging. Turns out Megan Torrini is actually Megan Lochte Torrini.

As in, Ryan’s sister Megan.

“Sometimes a girl sitting on the lap of America’s most eligible bachelor is there because there’s no room in the car,” said the AP, “not because she’s an aspiring model looking for a career break.”

Buzzfeed points out that the media who did run with the story must feel foolish now, because of the things they said. The site posted a picture which had been on TMZ.com with the headline “Ryan Lochte parties it up in London – breaststroke anyone?” and the caption “Nothing says party time like a pair of boobs in your face.”

The sites that reported this may have caused a heart attack among female Olympic fans everywhere, but at least we know the truth now.

And if it’s any consolation, we learned he is close with his family. One day we will get the report of Lochte’s new girlfriend, but for now, we will still call him an eligible bachelor.

Buzzfeed.com says Lochte’s rep names the other girl in the car as the swimmer’s stylist.