43 years after the moon landing, the astronaut went in for a routine test and doctors found something they didn’t like. 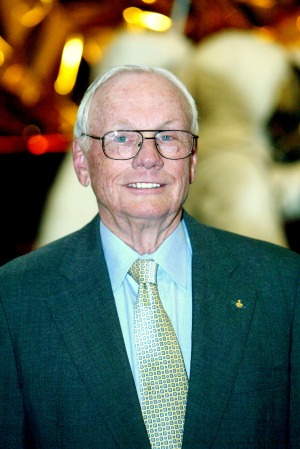 Neil Armstrong, the first man ever to walk on the face of the moon, underwent heart surgery Tuesday.

“Neil Armstrong, who lives in the Cincinnati area, went to the hospital on Monday for a stress test,” said NBC News. “He flunked, and on Tuesday, surgeons bypassed four blockages in his coronary arteries.”

NASA released a statement through Facebook after hearing of the surgery.

“Neil’s pioneering spirit will surely serve him well in this challenging time and the entire NASA Family is holding the Armstrong family in our thoughts and prayers,” the statement said.

Armstrong was a part of the Apollo 11 crew that landed on the moon July 20, 1969. According to the Associated Press, a fellow crew-member on that mission, Edwin “Buzz” Aldrin, today tweeted a message of well-wishes to his fellow astronaut.

“Just heard about Neil’s heart surgery today-Sending my best wishes for a speedy recovery-We agreed to make it the 50th Apollo Anniv in 2019,” the message said.

Armstrong and his wife were married in 1999 and settled in Ohio. The AP said that Armstrong has worked hard to stay out of the public view since then, but always had time for his fellow astronauts.

“He spoke at Ohio State University during a February event honoring fellow astronaut John Glenn and the 50th anniversary of Glenn becoming the first American to orbit the Earth,” said the Associated Press. “In May, Armstrong joined Gene Cernan, the last man to walk on the moon, at Pensacola Naval Air Station in Florida to support the opening of The National Flight Academy, which aims to teach math and science to kids through an aviation-oriented camp.”

NBC News quoted Armstrong’s wife Carol as saying he was “doing great” after the surgery.

The astronaut just reached another milestone by turning 82 years old this last Sunday.