Wikipedia is the encyclopedia of the new generation. But when you mix wikipedia, a presidential nominee and Stephen Colbert, hilarity can ensue. 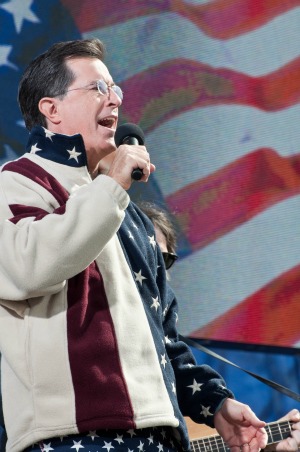 It is the age of Wikipedia, and for comedians, this election will be one to remember. Until someone else changes it with the click of a mouse.

Fox News said that because Sarah Palin’s Wikipedia page was edited 68 times the day before John McCain announced her as his running mate in 2008, we may be able to guess Romney’s pick based on the candidate’s Wikipedia page.

Colbert picked up on the idea and ran with it.

“I like friend of the show Tim Pawlenty,” said Colbert. “So to up his chances, I’m going to get on the old Wikipedia to pump up his edit count.”

On the show, Colbert pretended to edit Pawlenty’s page.

However, Colbert didn’t suggest he would be making the changes on his own. He urged his audience to do the same to help the candidate of their choice.

“I may have designated T-Paw the VP pick, but it doesn’t have to stay that way, folks,” he said. “You get on Wikipedia and edit any of these guys’ pages to give them the edge.”

While Colbert may be very proud of himself, the move no doubt frustrated Romney’s circle, who is very likely intending to edit the page of their candidate.

On Tuesday, Ann Romney’s horse Rafalca was eliminated at the Olympics, meaning that she will be returning to the United States at any time. Romney is likely waiting for her return before he announces his running mate.

For those putting the final touches on the VP nomination, time could be running out to make everything perfect. And in this generation, that includes on Wikipedia.