Ryan Lochte and Michael Phelps are hot commodities right now and are looking towards what is next. For both swimmers, the possibilities are endless. 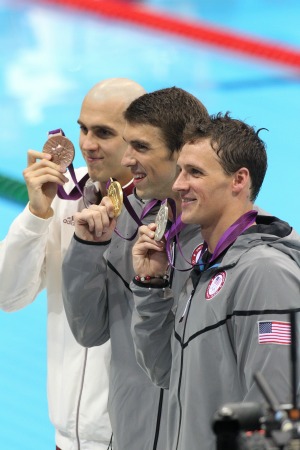 For Olympic gold medalists, what is life like after the Olympics? For swimmer Ryan Lochte, it looks like his life can be anything he wants.

The 28-year-old has nine endorsement deals with companies like Speedo, Gatorade, Ralph Lauren and Gillette, said the Hollywood Reporter. “And Fortune has estimated his 2012 endorsement earnings at $2.3 million.”

“Two different reality show concepts have been offered and one additional is being discussed,” Wright said.

She added that Will Ferrell has asked Lochte to appear in a Funny or Die video with him when he returns home.

“He has no issues whatsoever with regard to endorsements,” Wright told The Hollywood Reporter. “I can say things have been quite busy for team Lochte, heating up fast and furious since the Olympics.”

Lochte has said he plans to move to Los Angeles after the London Games.

TMZ spoke with an unnamed NBC executive who reportedly said they would love for Phelps to come back as an Olympic commentator in the 2016 Olympics.

“The man is smoking hot right now,” the executive said. “[We] would definitely hire Michael.”

An ABC source also told TMZ that even though they don’t carry the Olympics, they would find a place for the swimmer.

“If he would, we would gladly scoop him up to work for us,” said the source.

NBC has the Olympic rights until 2020 but ABC airs other sports programs and Phelps is a hot commodity right now.

The International Business Times Reports that there are rumors Phelps has received numerous offers from other companies, starting a bidding war between the networks.

Even though at least one of their Olympic careers is coming to an end, both Phelps and Lochte have bright futures ahead of them, no matter which direction they decide to go.