We knew the American team would win, but did the returning champs or the underdogs take home the gold? 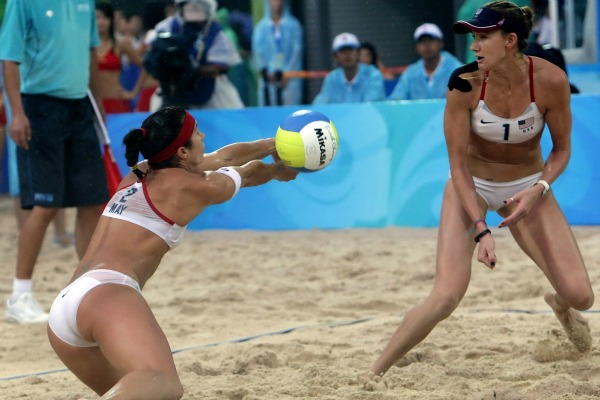 It was a given that a United States team would win the gold medal in women’s beach volleyball at the London Olympics, but which team would win was the question.

Misty May-Treanor and Kerri Walsh were the two-time Olympic champions coming into the match, and they were hoping to claim their third victory.

In the semi-finals, they had a tough match against China, but ended up clinching the victory in the end.

The other United States team, April Ross and Jennifer Kessy, had just as tough of a battle against Brazil in the semi-finals.

But both teams ended up coming out on top in their semi-final games and knew they would be fighting for the gold against some of their own.

According to Official London 2012 website, the first set today starting pretty evenly, with both teams being tied 13-13 early on. But May-Treanor and Walsh pulled ahead and won the set.

“Both teams fought hard to gain an edge in the second set, with Ross and Kessy pulling back their opponents with a well-timed ace to take it to 7-7,” said London2012.com. “However, three straight errors allowed May-Treanor and Walsh to pull away and they then powered to victory with four match points to spare.”

This gives May-Treanor and Walsh their third straight Olympic title, and gold medal.

In the consolation game, China started out with an early lead but the Brazilian team ended up taking the game for the bronze medal.

For Kessy, even with the loss, she was given one gift she had asked for – a prince in the crowd.

“We’ve been Tweeting and getting his name out there for a few months now,” Kessy told USA Today before the Olympics. “There’s been no contact yet, but it would be great to have them (Royal Family members) at any game. It would be great for the sport.”