The actress is looking to move on after splitting from her husband of 11 years in March. She has moved to central California, is working on a new show and spending more time with her kids and friends. 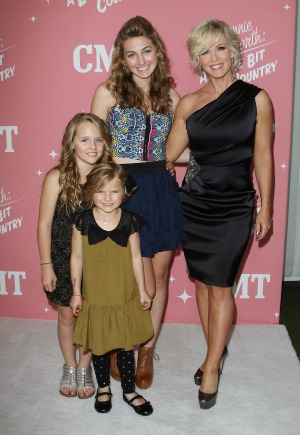 Jennie Garth is single for the first time in 11 years and it is a whole new world for her. The actress spoke with Entertainment Tonight Canada about her new life and future.

Garth said she was surprised when her friends are looking to help her meet someone new.

“A lot of people have a ‘friend’ that they want to set me up with, so it’s kind of weird!” she said, according to People.

But Garth isn’t necessarily looking to date any time soon. She wants to spend her free time with her children and friends.

On March 28, the actress and her husband, Twilight star Peter Facinelli, filed for divorce. The couple had been married 11 years and have three children.

“I know how hard it is,” Garth told People of her divorce. “I’ve said many times to myself, ‘I can’t imagine that happening to me.’ It was the unimaginable to me. But guess what, it happened and I got through it.”

Garth is working on her show, Jennie Garth, Little Bit Country, and spending time with her children. The mom couldn’t be more proud of her daughters, Luca, 14, Lola, 9 and Fiona, 5.

The show focuses on the star’s move to central California to have a normal life, and interestingly enough, is produced by Facinelli Films.

“Every one of my girls is a different size and shape,” she said. “I want them to be comfortable in their own skin and be healthy minded.”

As for her future, the 40-year-old actress told People she is just taking it one day at a time and focusing on herself and her family.

You can watch full episodes of Garth’s show on CMT.com.