A lot of factors play into whether or not an actor is picked for a movie role. Is sexuality one of them? Yes, according to Bret Easton Ellis: He thinks Matt Bomer is too gay to play Christian Grey. 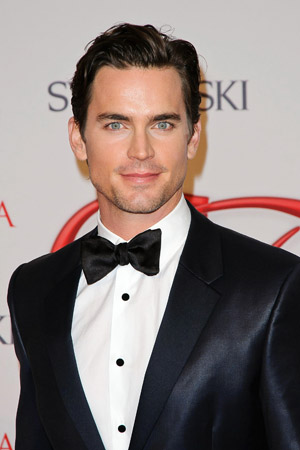 “Okay. Let’s finalise this … Matt Bomer is totally hot and a very good actor. He is NOT right for Christian Grey and it complicates the role,” he tweeted Tuesday, adding that Bomer can’t play a straight man because he’s married to another guy.

“I don’t care how good an actor you are but being married to another man complicates things for playing CG.”

Sketch of Christian Grey looks a lot like Val Kilmer >>

We’re really glad he weighed in on the subject, since everyone cares what he thinks. But, he’s totally not discriminating on the Magic Mike star because of his sexuality. Nope. Not at all.

“I am NOT discriminating Matt Bomer because of his sexuality. Fifty Shades of Grey demands an actor that is genuinely into women. Get it?!?”

No, we don’t get it: Bomer may — or may not— be in talks for the role. It seems like everyone from Alexander Skarsgard to Nicolas Cage have been mentioned for the job, but things are far from set in stone.

It doesn’t matter if he’s gay

How many actors have played characters with sexual orientations different from their own? Well, let’s see: Tom Hanks played a homosexual man with AIDS in Philadelphia, Jake Gyllenhaal and Heath Ledger played gay lovers in Brokeback Mountain and openly gay actor Neil Patrick Harris plays womanizer Barney Stinson on How I Met Your Mother, to name a few.

Plus, it’s not like it’s the first time Bomer has played a straight character: His White Collar and Magic Mike characters were both straight — and Bomer even had to grind on women for the role. We don’t remember getting too worked up about his sexuality when we watched the film — we were too busy with our dirty thoughts about his body.

Stephenie Meyer: Fifty Shades of Grey is “not my thing” >>

Matt Bomer hasn’t even talked about the role

The whole Fifty Shades of Grey casting rumor mill is ridiculous: It’s just fans casting out their hopes for who they want to play Christian and Ana — and the media runs with it. Most of those mentioned as “frontrunners” haven’t even talked to anyone about the role, including Emma Watson, Elizabeth Olsen and Skarsgard.

Give it a rest. They aren’t going to cast well-known actors in the role anyway. We’re willing to bet that the producers will cast unknowns in the roles, just like Robert Pattinson and Kristen Stewart were unknown before Twilight.

Is Bret Easton Ellis right? Is Matt Bomer too gay to play straight?