Justin Bieber is doing a pretty good job of insulting people lately — and everyone’s a target, including royalty and whole cultures of people. 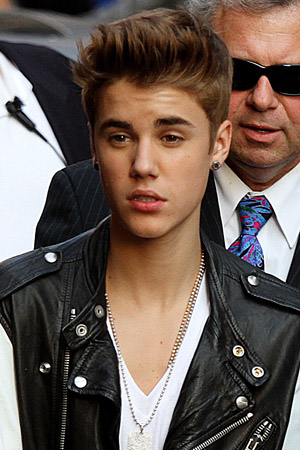 Justin Bieber might think he’s a “man,” but he’s got a long, long, long way to go, judging from some recent comments he’s made on everything from Prince William to Native Americans. Sorry Justin, you’re not a boy… but you’re definitely not a man yet.

During an interview with Rollercoaster magazine, Bieber made a comment about Prince William’s hair — or lack thereof.

“I mean, there are things to prevent that nowadays, like Propecia,” the 18-year-old singer said. “I don’t know why he doesn’t just get those things, those products. You just take Propecia and your hair grows back. Have you not got it over here?”

Uh, it’s not that simple, Bieber. Plus, why was the reporter asking him about Wills’ hair? We highly doubt the Duke of Cambridge loses any sleep over what Justin Bieber thinks of him.

The recent high school graduate made people everywhere cringe when he referred to the Sistine Chapel in Rome as the “Sixteenth Chapel” while on David Letterman’s late night show.

“Canadian high school,” Letterman mused after Bieber made the slip.

So, we’ve established that Bieber says a lot of misinformed — nay, stupid — things. However, his comment about Natives Americans takes the cake. A Rolling Stone reporter asked the Canada native about his background, so he thought it was the appropriate time to claim Native heritage.

“I’m actually part Indian. I think Inuit or something? I’m enough per cent that in Canada I can get free gas,” he said, clueless as to why that may be offensive to some people.

National Chief Betty Ann Lavallee said that sort of misguided commentary is exactly what Native communities in Canada have to deal with all the time.

“It promotes the misconception that we are somehow getting a free ride. This simply is not the case and we are concerned that many people may believe what he said,” she said.

They’re forgiving, though. Lavallee is even volunteering to help the Ontario-born pop star trace his roots.

“We don’t think he was trying to be malicious, or making a joke of aboriginal issues,” added Vice Chief Dwight Dorey.

Should Justin Bieber watch his words, or does it just show that he’s still a kid?