Oh no he di-n’t. Oh yes he did. That just happened. Elton John is one of the few ridiculously famous people who has the stones to say what the rest of us are thinking when it comes to Madonna. This tops the list of reasons we love him. 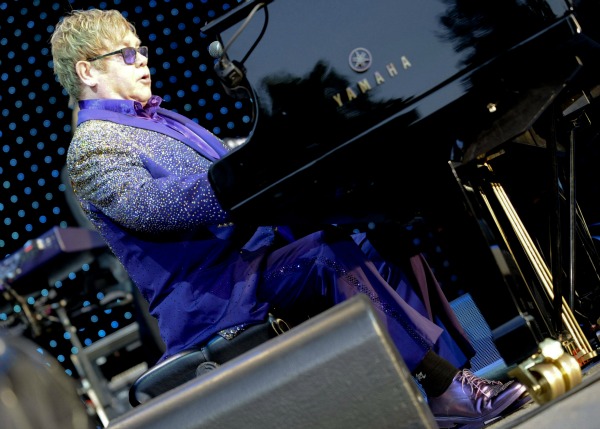 Go, Elton. Go, Elton. We’re going to go right ahead and bust out our hands-in-the-air, the-roof-is-on-fiah dance moves in response to Elton’s latest Madge jabs. Who else besides Elton is going to so accurately articulate what the rest of us are thinking about Madonna? He described her as a nightmare, said her tour was a disaster and then knocked it out of the park by saying, “It couldn’t happen to a bigger [see you next Tuesday—or c-word, if you prefer].” Wow. Them’s fightin’ words. But such candor falling from the lips of the uber-famous is so refreshing! Elton went on to say that Madonna looked like a “f***ing fairground stripper.” And the congregation said “Amen.”

Elton John made The Bedazzler a household name. He doesn’t leave the house unless he is sparkling from head to toe. He’s like a human rainbow — shiny, colorful and wondrous. And can we talk about his glasses collection for a second? Every day is the 4th of July in Elton’s world with eyeglasses that are large, small, sparkly and pastel-hued. He’s just a big huggable circus. We love him for that.

Lady Gaga is his son’s godmother

It may seem obvious and trite to point out that Elton’s songs still make us stop what we are doing and sing along. The only reason we bring it up is because real musicians, who can plop down behind a piano live on stage and crank out legendary tunes that sound as incredible as the first time we heard them, are a dying breed. Sadly, many of today’s chart-topping “talent” can’t leave a studio. And if they do, they lip-sync and try to distract us with a bunch of fancy dancing and smoke and mirrors (aka Madonna). Elton just does what he does. And what he does is the textbook definition of talented.

Elton John surprises bride by playing at her wedding >>

Elton John was knighted by Queen Elizabeth II in 1998 for his music and charitable work, and became Sir Elton Hercules John. Sir and Hercules? That’s hard to compete with. We’re not entirely sure what special privileges this entitles Elton John to, but it’s still freakin’ awesome. The female equivalent is “Dame,” which as far as we know, Madonna has not yet received. Here in the states, we call that “game, set, match.”