Zach Galifianakis has a love-hate relationship with his job. He loves what he does for a living, but wishes people would take him more seriously. 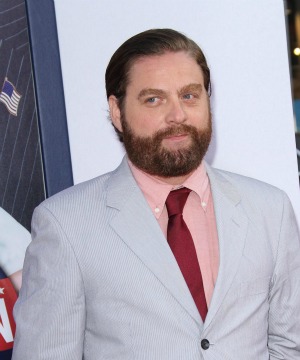 Most of us first met Zach Galifianakis in 2009 when he played the loveable loser Alan in The Hangover. But he has been in the industry for a long time, mostly as an underground comic but also as an actor in TV and film.

Galifianakis loves his job, but doesn’t necessarily love everything that comes along with it.

“I have a love-hate relationship with the entertainment business in general, I think,” he told Mike Ryan with the Huffington Post. “I am a bit of a baby: I like to be in movies, but the ‘being known’ part is the drag part.”

Galifianakis is also pretty sure that some of the things that come along with fame are things that no one would enjoy.

“I was happiest when I was an underground comedian,” he said. “It’s just, my life was less complicated. And not being followed into airport bathrooms by 14-year-olds. Nobody would like that.”

The other part Galifianakis doesn’t like is that no one seems to take him seriously any more, when he is not doing comedy.

“It’s a bit of a burden,” he told Ryan. “At my sister’s wedding, years ago, I started crying. And everybody thought it was a joke. It is one of those things that people think I’m being sarcastic, but I’m not ‘on’ all of the time. I like to be sincere as much as I can.”

Galifianakis has stuck with the comedic roles though. His new film The Campaign pairs him up with another comedic actor, Will Ferrell. The two play candidates running against each other in an election. Galifianakis is the Republican on the ticket. He said he was happy with how the film was done though, that it poked fun at both parties equally.

“I don’t think anybody can accuse, in quotes, ‘liberal Hollywood filmmakers,’ of picking a side here,” Galifianakis said. “We didn’t want to do that. We wanted to make it broader than that.”

Even though the movie is a comedy, he feels that they brought out a bigger issue – an issue more important than either party or one election.

“It just became something bigger,” Galifianakis told Ryan. “But, to play a sympathetic Republican candidate — I’m glad we went against the grain a little bit, as far as that goes. There are great people on both aisles, it’s just the system is broken.”

The Campaign comes out this Friday.

Galifianakis is staying busy. He has three other films in the works, including The Hangover III, set to be released in 2013.