The 23-year-old actress opens up about her career, moving to Los Angeles and recovering from an eating disorder. 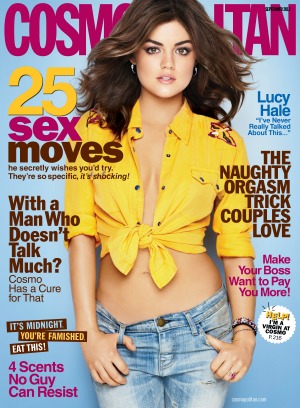 Lucy Hale joined Pretty Little Liars in 2010 and has since become the show’s breakout star.

Hale is appearing on the August issue of Cosmopolitan and sat down with the magazine to chat about life, boys and her career.

The 23-year-old actress took a chance on her career. The magazine asked her what is the most fearless thing she has done.

“Moving to Los Angeles to be an actress,” she told Cosmopolitan.com. “My mom and I packed the car and just went for it.”

When she joined Pretty Little Liars, she said that she knew right away that it was the right choice for her career.

“I loved the name of the show,” Hale told the magazine. “I also trusted my gut. I just knew this would be a hit.”

The actress also shared a secret with the magazine she hasn’t talked about before.

“I’ve never really talked about this, but I would go days without eating,” Hale told Cosmopolitan.com. “Or maybe I’d have some fruit and then go to the gym for three hours. I knew I had a problem…It was a gradual process but I changed myself.”

Hale also dished on her boyfriend of only a few months, Chris Zylka. When she met him, she told the magazine she was instantly attracted.

“I was like ‘holy crap you’re gorgeous!’” she said. “It was like no one else was there. We couldn’t stop talking.”

Hale doesn’t put up with just anyone though. She said smoking is her one dealbreaker when meeting a new guy. She also can’t stand when guys aren’t straight-forward with her.

“I’m not a game player,” Hale said. “I don’t understand that. Life is too short. You should be honest about how you feel.”

The actress is one of the names that has been mentioned as a potential candidate to play Ana Steele in the 50 Shades of Grey trilogy.