Nickelodeon’s Ariana Grande’s fans are so loyal that their love and admiration for the Victorious actress takes over my Twitter feed daily. When I announced that I was interviewing Ariana and asked fans to submit questions, I was met with more than enough inquisitive teens just hoping to get their question answered by their teen role model. 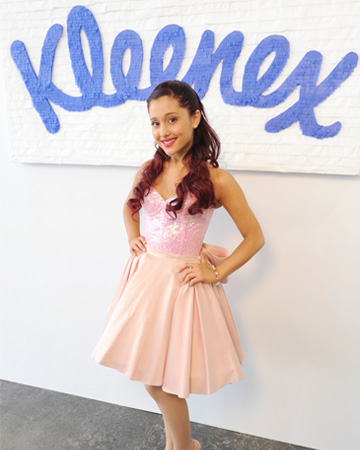 Ariana Grande got her big break when she was 15 years old, singing and dancing her way to fame on the Broadway stage. Since then, Ariana has been catapulted into fame, thanks to her role as Cat Valentine on the Nickelodeon sitcom, Victorious.

But even though she’s busy filming her show, recording her debut album, and working with Kleenex on its “Shield Sneeze Swish” campaign, the singer/actress took some time to chat with us about her favorite artists, guilty pleasure television shows, and hopes for the upcoming years.

SheKnows: So I know you’re a huge Mariah Carey fan… what do you think about Carey joining the American Idol judging panel?

SheKnows: Who do you think should take the second open seat?

Ariana: Um (laughs), Madonna. She would be like, “I hate everyone…” pretty much. But no, I think she would be funny.

SheKnows: Would you ever consider being a judge?

Ariana: Yeah, of course! I would just be scared to tell somebody I didn’t like them.

SK: So you’re going to be coming out with you debut album soon. What can your fans expect?

Ariana: They can expect a lot of honesty. It’s like a direct… you know, it’s like it used to be pages from my diary, instead of keeping diary, I would write songs about what was happening in my life. So it’s really personal. It’s a Motown throwback and pop at the same time, so it’s ’50s and ’60s inspiration mixed with today.

SK: Great. Were there any artists who really inspired you? 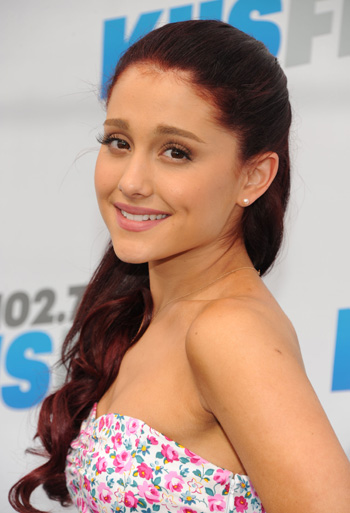 SK: Awesome. Did you do any collaborations for the album?

Ariana: I worked with Sky Blu from LMFAO and we did a song together. That’s one of my favorites on the whole album so far. He’s amazing! And I worked with 3OH!3 on a few songs and, yeah, I’ve been really fortunate to work with all these people.

SheKnows: Is there anybody you haven’t worked with who you are really looking forward to having the opportunity to work with in the future?

Ariana: I would love to work with Mike Posner. He’s amazing and a great writer.

SheKnows: That’s awesome. Switching gears… I’ve heard you can do the best impersonations ever. Who are your favorite people to impersonate?

Ariana: Judy Garland and my best friend, Erin. Those are my two favorite impersonations.

SheKnows: That’s fun. What are your hopes for the next few years?

Ariana: My hopes for the next few years is to be doing something similar to what I have been doing these past two years. I have been really happy… I love making music and I love doing TV shows. I love it, it’s really fun!

SheKnows: Awesome! There are a lot of girls just like you who are hoping to break into the industry. How did you get where you are today?

Ariana: Hard, hard, hard work! It’s very hard and it doesn’t come easily… and luck! You just have to be in the right place at the right time and work hard and be passionate about it. Never lose hope, you know what I mean, if you love something!

SheKnows: What is the best piece of advice you’ve ever received?

Ariana: Best piece advice I have ever received would probably be, only do what is really going to make you happy… do what makes you happy.

SheKnows: That’s really good advice. What are some of your favorite television shows?

Ariana: Some of my favorite television shows are Top Model and Project Runway… The Golden Girls and Gossip Girl! I love Gossip Girl ’cause it’s glamorous, set in New York, and has great fashion!

SheKnows: So I reached out to your fans on twitter to get the questions they wanted to ask you… the first one is, are you ever going to be in a movie? (Thanks @iSwagiana)

Ariana: Am I ever going to be in a movie? Yeah, I don’t see why not. I would love to do a movie. I love singing and I love acting, so wherever I can find a place to do both of those things, I would do it! In a heartbeat.

SheKnows: How did you become a singer? (Thanks @LeannBuck)

Ariana: I love singing. I practice a lot and I sing every day, and I got really lucky.

SheKnows: When did you start singing?

Ariana: When I was like, 2. I know it sounds silly but when I was 2, basically.

SheKnows: Would you ever want to work with Justin Bieber? (Thanks @JBluvsCairra) ?

Ariana: Yeah, of course! I would love to work with him. I think he is amazing!

SheKnows: What are some of your favorite things to do in your free time? (Thanks @KardashGomez)

Ariana: Some of my favorite things to do in my free time are spend time with my friends and family and my dog, and play video games and, um, watch old movies!

SheKnows: What are some things your fans don’t know about you that you think they should?

Ariana: I really hate this question… my fans really know every single thing they need to know about me but, um, let me try to think of something…

SheKnows: Is there a favorite food or a guilty pleasure, TV show, or a song you really like?

Ariana: Guilty pleasure is a chocolate milkshake and french fries!

SheKnows: That’s a good one! Well, that’s all I’ve got.

Ariana: Thank you so much!

Check out Ariana’s first single, “Put Your Hearts Up”

To see interviews with more hot artists, check out…