SheKnows caught up with jokester Jane Lynch at the Roseanne roast. The Glee star weighs in on Chick-fil-A and gives some unusual advice to young comedians by suggesting they look at the bible. Uh, really, Jane? 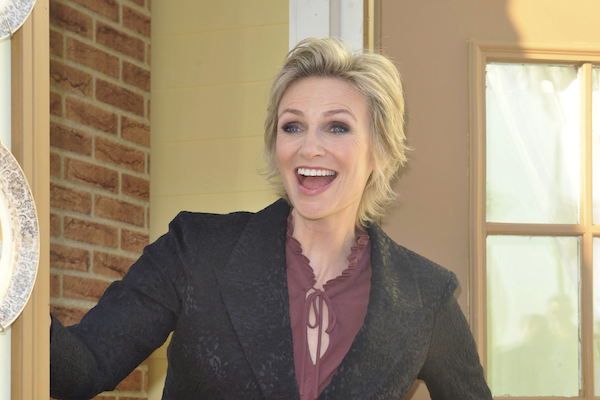 Jane Lynch gushed about Roseanne and how honored she felt being Roastmaster, saying, “She’s my hero. She’s always totally Roseanne, she doesn’t put on airs.”

Lynch also noted that Roseanne was “One of the first women I ever saw on TV that made me laugh out loud. She inspired me to be myself. Millions of women relate to us because we’re in the entertainment field, so it’s important to stay true to who we are.”

Despite saying the roast was a “menopause-opalooza”, Lynch was ecstatic to have so many funny women on television at the same time saying, “It used to be much harder, but right now is a great time to be a woman in television. Tina Fey, Amy Pohler, the show Mike and Molly are all so great.”

Lynch’s advice for young comedians is to “Mine the dark side, not be afraid of it.” She also urged young performers to ask “What is the part of you that maybe the bible tells you not to be? Go in and look at it, make fun of it.”

This odd approach certainly worked for her!

Check out this clip from the roast to hear Lynch’s message to Chick-fil-A. WARNING: video is uncensored and contains foul language!