Bristol Palin’s ex is apparently so furious over the bad parenting featured on her reality show, Life’s a Tripp, that he’s seeking full custody of their 3-year-old son. 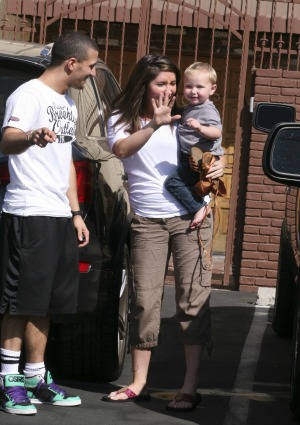 Levi Johnston reportedly picked up the paperwork needed to file for custody of his son with Bristol Palin, Tripp, 3.

After more than two years of being mum on the issue, why is a custody battle brewing all over again?

Johnston tells TMZ we should look no further than Life’s a Tripp.

Chances are you haven’t tuned in (no one has), but the Lifetime series features Sarah Palin’s oldest daughter as she struggles with young motherhood.

In one episode, Tripp throws a temper tantrum when he doesn’t get to go to the pool.

He then goes on to repeatedly tell Bristol and her sister, Willow, that he hates them. That’s hardly the worst of it.

While batting at his young aunt, Tripp tells Willow to, “Go away, you f***!”

Well, Johnston must think he can do better (and that’s not hard).

“I love my son more than anything,” he told TMZ. “I will do whatever it takes to make sure he is raised the right way.”

As of Tuesday morning, the Palin family has not issued a statement. Mama Palin has been busy traveling the country to drum up support for GOP candidates in a contentious election year.