The actor didn’t even have to read the script to Hope Springs before accepting the part. He heard “Meryl Streep” and he was sold. 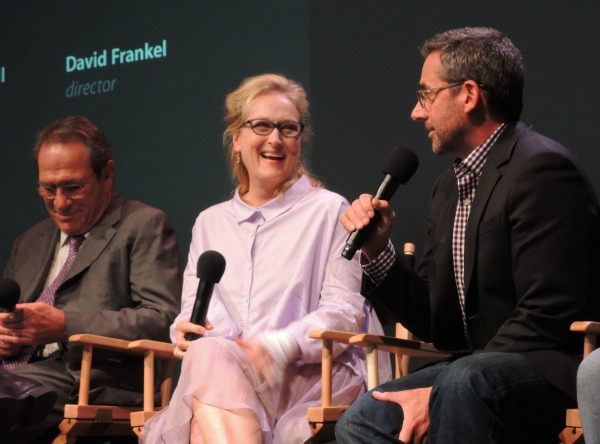 Steve Carell is first and foremost a comedian.

But since coming into our lives almost twenty years ago, he has branched out — first as a talk show commentator, then as a television and movie actor.

His parts in shows like The Daily Show and The Office have showed us Carell’s diversity and comedic talent.

But this time, Carell’s talent doesn’t necessarily include being the funny guy.

“You know, I read the script and there was nothing that indicated that my character would be funny,” Carell told Mike Ryan with the Huffington Post. “I thought the comedy of those scenes relied on Tommy Lee Jones and Meryl Streep’s characters… And I was there, really, just to service that.”

Carell did say that he was slightly star struck by his co-stars. For an actor who has risen through the ranks fairly quickly, the chance to work with two legendary actors was an amazing surprise to him.

“Well, when it was offered to me, that was the weirdest thing,” he said. “Well, I don’t want to say ‘weird,’ but incredibly exciting. Like a ‘pinch yourself’ moment.”

The actor probably receives a lot of scripts, but this one was sent with a note saying he may be working with Meryl Streep. To Carell, that meant the answer was easy — before he even knew what the story was about.

“I was sent this script with a note that said, ‘Meryl Streep is attached to play the lead and they’re interested in you for the part of the doctor. Please read,’” Carell told Ryan. “I didn’t even need to read it. You hear something like that — you’re invited to be a part of something with her — you just say, ‘Yes.’”

Carell has many new projects in the works, including The Expendables 2 and 2013’s much-anticipated Anchorman 2.

Hope Springs comes out this Wednesday.