Farrah Abraham: MTV reality star, author… and singer? Well, that’s what she wants us to think. We’re not really sure that you can call this music. 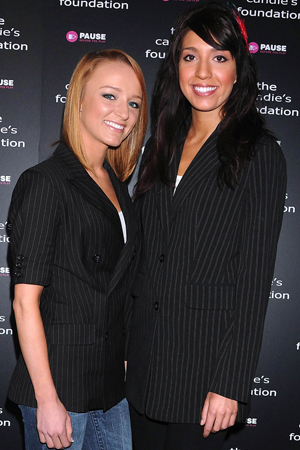 Move over, Rebecca Black: Teen Mom star Farrah Abraham has taken your stop atop the list of “worst songs ever, ever, ever.” The reality star released a single to go along with her memoir, My Teenage Dream Ended, and it’s… well, go ahead and listen for yourself.

We think there are words in the song? We can’t tell over the autotune and other distortions.

In the book, Abraham talks about getting high and wanting to kill herself.

“I figured I would drown myself in the bathtub — that seemed like the easiest way to go,” she told InTouch Weekly of how she thought of killing herself. Abraham added that she turned to alcohol and drugs to numb the pain.

“When I drank, I’d be happy for ten minutes,” she said. “When I got high, I’d feel a sense of nothingness for about an hour. But in the end, my negative emotions always came rushing back.”

Abraham said she’s over that phase, but her “friend” Austin Mathouser told RadarOnline that she’s all about eating pills and drinking.

“When she was in Hollywood to celebrate her 21st birthday, we partied at Geisha House and Kiss Lounge in Beso,” he told the website. “All throughout dinner and the club, she talked about how she does Xanax and Adderall to stay up and energized. She frequented the bathroom that whole night taking them to stay up.”

“Farrah said she does Adderall before every event that she attends,” Austin added. “It’s sad because she has a little one. Sophia should be her ‘high,’ her enjoyment and happiness.”

What do you think of Teen Mom Farrah’s new song?