Michael Clarke Duncan is out of the ICU, but he isn’t out of the woods yet. The actor remains hospitalized after a heart attack, as Omarosa watches on — and watches the bills and pills pile up! 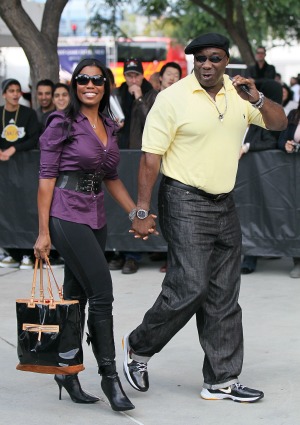 Omarosa and Michael Clarke Duncan are still both battling for his post-heart attack health and racking up some major bills. Sharing her thoughts on Twitter, Omarosa is thanking God for her love’s recovery thus far, as well as sharing a bit of advice with followers.

“Everyday GOD continues to smile upon my luv Michael Clarke Duncan on this arduous road to recovery,” Omarosa tweeted on August 3. “God is with us every step of the way!!”

Updating the press on Michael Clarke Duncan’s health, a rep for the 54-year-old told People, “His family are firm believers in the power of prayer and have asked that you keep him in yours during this time.”

On July 13, when the actor was found unconscious around 2 a.m., Omarosa reportedly called 9-1-1 and then began performing CPR, quite possibly saving his life.

Nearly a month after the brush with death, we know Michael Clarke Duncan has been moved out of the Intensive Care Unit but remains hospitalized. The toll of the experience, not only emotional, appears to be weighing heavily on Omarosa.

On August 1, she tweeted a photo of prescription pills spilled across numerous $20 bills. Adding a message to her 30,000+ followers, she wrote, “After going through this medical scare with MCD my advice to all of you is to NEVER get SICK!!”

Interestingly, the two-time The Apprentice contestant also tweeted a second photo of them together and this message: “A friend sent me this picture of me and my hubby last year — one of my fav pics because of his amazing smile!”

“Hubby,” you say? Last we heard Omarosa and Michael Clarke Duncan were just girlfriend and boyfriend!