Miley Cyrus and her tiny tummy graces the new cover of Marie Claire. Inside, the actress and singer talks about her engagement ring and why she doesn’t care about her wedding. 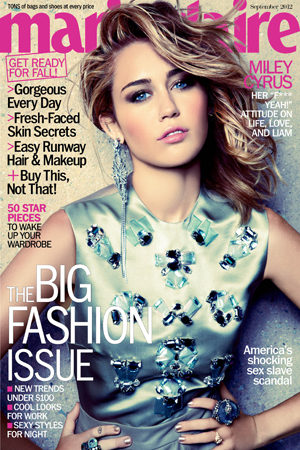 We’ve all heard the rumors: Miley Cyrus and fiance Liam Hemsworth are already married or are planning a wedding for later this year. However, the former Hannah Montana actress tells Marie Claire in the new issue that she’s not planning anything… yet.

“Life is too short not to be with the person you want to be with,” she tells the magazine in her September cover interview. “I don’t really care about the wedding or the piece of paper as much as I do the promise we’ve made to each other. And we want to have a long engagement.”

It’s nice to hear that, especially since it seemed like Cyrus and her Australian beau were running to the altar. The Hunger Games star proposed in June with a 3.5-carat sparkler from Hollywood jeweler Neil Lane. Contrary to reports, she had nothing to do with designing the ring.

“I had no input,” Cyrus says of the ring, cut in the late 1800’s. “I saw it online at one point and thought it was really pretty. I just love that it’s old and has a story. And I’m happy because it doesn’t look like anything else I wear.”

Or doesn’t wear: Cyrus is often spotted leaving Pilates class with a bare midriff — and it seems like she hates wearing a bra. Hemsworth doesn’t care about her wardrobe, though — they’re both secure in the relationship.

“Liam and I have a really good relationship,” she says. “Neither of us is super jealous. We know each other and would never do anything to hurt each other.”

Let’s hope Cyrus’ definition of “a long engagement” is measured in years, not months.