Indiana is hosting the first state fair since the tragedy that took the lives of seven before a Sugarland concert. So how are the band, and the fair, dealing a year later? 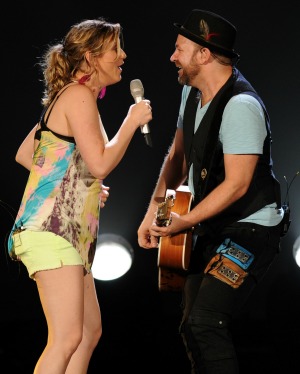 It has been almost a year since the tragedy that took the lives of seven people just before a Sugarland concert at the Indiana State Fair.

The accident happened when high winds collapsed a stage just before the country duo Sugarland went on stage, killing seven people and injuring dozens of others.

The band is just looking to move past the tragedy. In November, a lawsuit was filed against the band, the concert promoter and the stage-builders for negligence, according to the LA Times. As of February, the band was seeking a jury trial in the case.

The band is looking to move past the tragedy though.

In June, lead singer Jennifer Nettles announced she and her husband are expecting a child, and according to E! News, she is now showing off her baby bump at concerts.

The singer is also working as a mentor on the show Duets.

The Indiana State Fair is once again happening this week, just less than a year after the accident that happened on August 13, 2011.

The fair is working to restore its image and make sure nothing like the accident ever happens again.

“The Indiana State Fair hopes to cast off the shadow of last year’s deadly stage collapse,” said Charlie Wilson with the Associated Press, “and restore its place as a traditional statewide reunion by dealing with its grief and pumping up its attractions.”

The fair also is hoping to attract back the crowds that did not attend after the accident.

“Attendance and revenue fell last year after the collapse, and this year’s fairgoers will face higher ticket prices and a parking fee for the first time,” said Wilson.

Attendance this year is going well though, and the fairgoers don’t seem to be thinking of last year’s tragedy.

“People just need to use common sense,” Verlena Jones of Monticello, Indiana told Wilson. “If it looks like it’s going to storm, get the heck out of there.”

The fair has also implemented new safety procedures this year and hopes to start the healing process by honoring the people killed last year.

“The grandstand where the collapse occurred won’t host concerts,” said Wilson. “Those have been moved to Bankers Life Fieldhouse.”