Ryan Lochte wants the ladies of the world to know that despite what his mom said, he’s no wham-bam-thank-you-ma’am kind of player. One-night stands? Never! 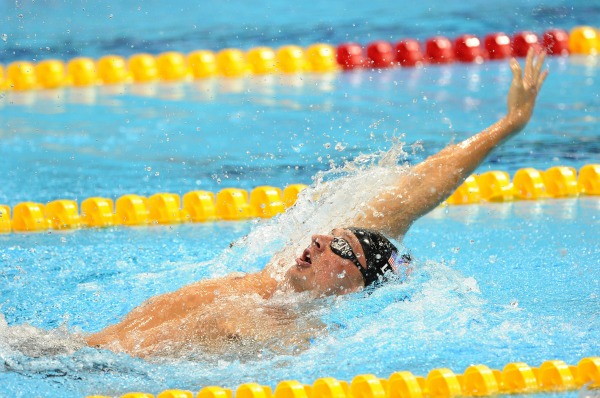 Ryan Lochte’s one-night stand kind of man reputation is up for debate. Though the Olympic swimmer’s mom told the press a quick dinner and shag is all her son has time for as a professional athlete, he’s speaking out to insist otherwise. Don’t get scared away yet, ladies!

Ike Lochte, Ryan Lochte‘s mom, told reporters during an NBC Today show interview, “He goes out on one-night stands,” sending viewers into a tizzy. “He’s not able to give fully to a relationship because he’s always on the go.”

Apparently, what she meant to say however, is her 28-year-old (whose birthday is today, Aug. 3!) swimming phenom of a son goes out on dates.

“They took it out of context. My mom is really new to all of this and the media,” Ryan Lochte told Us Weekly while attempting to clear up his reputation. “She meant since the last four years I just wanted to focus on swimming, and I didn’t really have time for a relationship.”

“When I’m in a relationship, I want to give that person my entire heart and I wasn’t able to ever do that because of swimming. I’m always on the go. So what she meant is that I do go out on dates,” Ryan Lochte continued. “But it’s not that thing that everyone is talking about, because that’s not me. I’ve never done that and never have been like that, so I don’t want people to think that about me.”

So is the “ladies man” label not a good fit then? “Well, I love ladies!” he confirmed with a laughing reply.

Luckily for ladies dreaming of some Lochte love, the 11-time Olympic gold medalist now has a bit more time to spare. Ryan Lochte’s 2012 Summer Games experience came to a close on Thursday.

“I’m done and I’m relieved! I’m excited that the Games are over,” the swimming hunk said. “The last 4 years have been really hard. I’m happy with how well I did. I’m happy with my overall performance.”

Are you buying Ryan Lochte’s claims he’s not a one-night stand kind of man?