Rowan Atkinson delighted us at the Olympics Opening Ceremonies with his one-note rendition of “Chariots of Fire.” It inspired us to round up a few of his other clips — and we can’t stop laughing! Simple, clean humor at its finest. 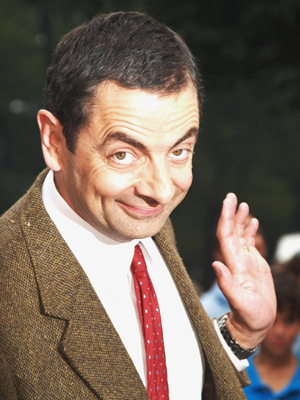 We can’t get enough of Rowan Atkinson’s — as Mr. Bean — rousing “Chariots of Fire” performance at the 2012 Olympics Opening Ceremonies. Sure, we love some raunchy humor, but it’s nice to get some simple, clean laughs once in a while.

Even Russia’s stoic Vladamir Putin thought his sketch was funny — he called it “hilarious,” which made us laugh thinking of the Russian President saying “hilarious” with a straight face.

But, we digress. Mr. Bean’s Olympics performance sent us down the YouTube rabbit hole looking for video after video of Atkinson’s hilarity. Check out the four funniest videos we found.

Janet Jackson didn’t event the “wardrobe malfunction” — Mr. Bean did. Sadly, it happened while he was waiting to meet the Queen. He managed to get his fly up in time, but the adrenaline caused him to do something pretty hilarious.

Poor Mr. Bean: He just wanted to go to the fair. Instead, he gets stuck with a lost baby and chased by a huge dog. Things were looking up when he won a goldfish during a carnival game, until…

Mr. Bean wasn’t expecting this when he ordered the steak tartar at a nice restaurant. Looks… appetizing, sir.

Mr. Bean decided to paint his apartment. However, he manages to get paint pretty much everywhere except on the walls. We can relate to this, sadly.

What is your favorite Mr. Bean video? Tell us below!