SheKnows brings you this exclusive clip from Hope Springs, the new comedy starring Meryl Streep and Tommy Lee Jones about getting your burnt-out love life back on track. 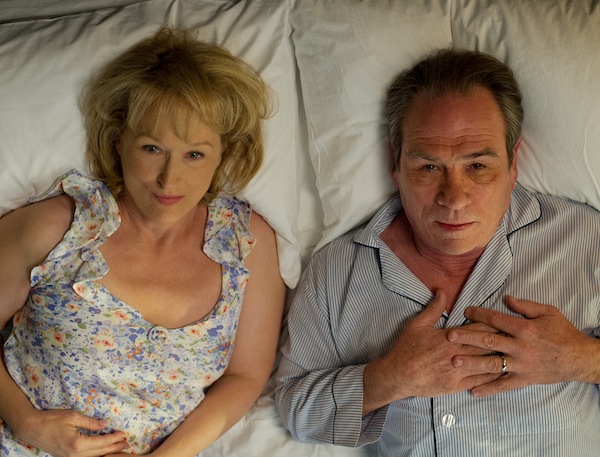 “Umm, honey, I think our sex life is boring…”

This is about the toughest thing any married woman or man will ever have to say to a partner. So… if sex is such an awkward subject, but truly you’re not getting what you need in the bedroom, then just how does one broach the subject?

Hire a sex therapist who looks just like Steve Carell! At least, that’s what Meryl Streep and Tommy Lee Jones’ characters do in Hope Springs, the movie about getting the spice back in your tired old married love life.

He wants to do what with your what…?

SheKnows brings you this exclusive featurette from the very cheeky new comedy about saying what you’ve been dying to say about your partner’s habits in the bedroom.

Interviews with Streep and Jones show just how much fun they had getting into the minds of a couple who is perfect in every way expect for when it comes to intimacy. Wait, isn’t that the only thing couples should be good at? It’s not always true. Seeing eye-to-eye, or lip-to-lip, in the bedroom is just as important as agreeing on work, careers, where to live and raising a family. This movie hopes to make a point of that.

“This guy hates the idea of therapy,” Jones says of his character. Streep, like any good femme in the room, had more to say of the married couple she and her co-star portray on screen.

“Women are more interested in spelunking around inside of a relationship and finding out what makes it work and trying to make it better,” she says of the film’s topic, which seems to have tickled her pink.

When Streep’s character has to buy a book titled, Sex Tips for Straight Women by a Gay Man, things really get interesting. Check out this behind-the-scenes interview with Streep and Jones for more juicy tidbits.

Hope Springs is directed by David Frankel who has also directed The Big Year, Marley & Me, The Devil Wears Prada and Sex in the City. The film leaps into theaters Aug. 8.