One of the hottest breakout bands this summer is the Nashville born and raised pop group Hot Chelle Rae. With hits like “Tonight, Tonight” and “I Like it Like That,” band members Ryan, Nash, Ian and Jamie are realizing that they have finally broken into the biz. 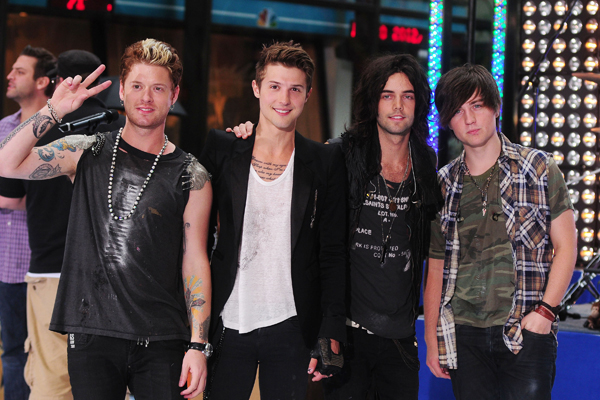 I have officially self-proclaimed myself as one lucky girl. Why? Because I got to hang out and interview the guys behind, what I’ve decided, is the coolest new band, Hot Chelle Rae. If their music hasn’t 100 percent convinced you of their awesomeness yet, trust me, their bad-boy, rockstar personas definitely will.

We kicked off the interview with the most prominent question burning in a lot of people’s minds — You’re a pop band, with rocker style and Nashville roots… huh?! “Our parents have country roots, but they kind of played us pop music growing up,” lead singer Ryan Follese explained. “My first album my dad ever bought me was Oasis, and then it was Del Amitri, and then it was Sheryl Crow… Secretly, they love pop.” Bass player Ian Keaggy chimed in that country stars are not the only successful products of Nashville, “Yes, Nashville is loaded with country music but it also, especially while we were growing up, has a lot of pop rock and rock bands really exploding out of it.” And, get ready, because they think it’s going to continue to surprise people (note — this is when I’ve decided I’m moving to Nashville for my big break!).

Next on the burning list of questions was their very unique, and quite frankly, confusing band name. “We got it from Myspace,” explained Ryan, “Nash befriended a ‘girl’ (he really did the air-quotes around girl) by the handle of Chelle Rae on Myspace.” Guitarist Nash Overstreet had to jump in to defend himself, “Not my fault! She was really hot and she worked at a record label and she could hook us up with some people,” Nash explained, “and then one day it was brought to our attention that she was probably too good to be true, and then we realized all this sketchy stuff. She had never come to a show, she had always, like, been somewhere else when we were near her home town. Everybody that knew her didn’t actually know her personally, they’d only met her online…” Long story short, they needed a name for their band and realized when they searched google for “Hot Chelle” nothing came up, so they would be completely unique from anything else out there… smart, huh? So, alas, Hot Chelle Rae was born, and all thanks to a Myspace con-artist. It totally makes sense now!

But music isn’t the only important thing to these guys — their fans and the fight against bullies are right up there with it. After almost every concert, the four of them go out to the venue’s lobby to meet fans, take pictures and give autographs. “You have to meet the people who support you every night,” said drummer Jamie Follese. “We toured for a long time and had no fans,” Jamie’s brother Ryan added, “We are so grateful.” And showing even more appreciation and encouragement for their fans and kids everywhere, Hot Chelle Rae partakes in a lot of anti-bullying projects and concerts. “It’s incredibly important to make a stand for something like this… Everyone gets bullied in some way, shape or form growing up,” Ryan confessed, “I got bullied and I know how bad it can get for some kids. It’s not cool.”

Life on the road

Hot Chelle Rae is touring the country right now opening up for The X Factor‘s Demi Lovato, and between shows, is working on new music in Canada. “She’s been awesome to us, as a supporting act, and it’s been enjoyable,” Nash said of Lovato, but of course, their tour with America’s Country Sweetheart Taylor Swift in Australia was their favorite so far. “The coolest part was that we had so much down time and so much time off in the cities, that we could play a show and then the next day, we could all go do something and hang out,” said Nash. “We made life-long friends on that tour.”

For even more on what their friendships are really like, tour bus rules (no #2!) and who’s best, check out the interview below “tonight, tonight!”

To see even more footage from the interview, click here!

For other hot, new artists, check out: