Former The City star Whitney Port is also a designer — and she wants $50,000 to help her put on a fashion show during New York Fashion Week in 2013. Care to pony up the cash?

Related story Apparently, No One Wanted to Sit Next to Tiffany Trump at NYFW 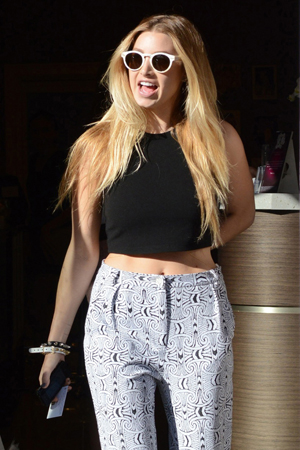 Want to help Whitney Port add more money to her estimated $2.5 million dollar net worth? You can: Donate some cash to her $50,000 IndieGoGo campaign. The former MTV reality star is raising money to help her put on a show of her fashion line, Whitney Eve, during Mercedes-Benz New York Fashion Week in September.

“This year, we would like to take unprecedented steps on our way to Mercedes Benz Fashion Week with the first fan-supported runway show on Sept. 12, 2012, at Lincoln Center in New York, so I can share my art in a way that educates and involves my fans to be an integral part of the process,” she writes on the campaign page. “Having come off a successful show at New York Fashion Week last season, the time has come to show again but in a way that has never been done before. I want to provide my fans with a behind-the-scenes experience on how a runway show of this caliber is designed, developed and executed.”

Port says the $50K is to help pay for the tent space, production company fees, models, music and a stylist. Your donations will get you everything from a Twitter shout out ($5) to a front-row seat at the show ($450). A win-win situation, right? Not really: Designers use fashion shows to impress buyers into purchasing their collections, so she’ll likely make way more money than the “prizes” are worth — and you won’t see a dime back for your investment.

On the runway: Whitney Eve >>

The whole thing leaves a bad taste in our mouths. The money will come from her fans, including hard-working teens and young adults. Why can’t she finance the show herself — or find a backer? it’s not like she’s some up-and-comer: The reality star has endorsement deals, a judging position on Britain and Ireland’s Next Top Model — not to mention, she comes from a wealthy family.

As of deadline, her campaign has earned $2,546 — and fans have snapped up three of the five front row seats, meaning they’ve donated at least $450 each. She has 39 more days to make her goal.

Tacky? You be the judge.