Some fans predicted that Kristen Stewart’s career would suffer after her cheating scandal. Guess again! She just beat The Hunger Games star Jennifer Lawrence for a new role. 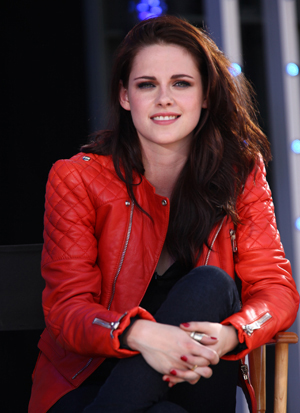 Kristen Stewart might still be trying to get Robert Pattinson to forgive her after her dalliances with Rupert Sanders, but that’s not distracting her from her career. The actress has just signed on to star in an adaptation of Wiliam Styron’s 1951 novel Lie Down in Darkness.

She even managed to get the role over America’s current teen sweetheart, The Hunger Games’ Jennifer Lawrence.

What remains in question is the sequel to Snow White and the Huntsman. Universal told Vulture that “nothing has changed and we are still looking at sequel options that would include Rupert [Sanders] directing.” Not if Sanders’ wife, Liberty Ross, has anything to do with it. The model reportedly told her philandering husband that there’s no way she’ll let him work with Stewart again.

Should have kept it in your pants, Rup.

Stewart is reportedly talking to Pattinson again after he escaped to Reese Witherspoon’s Ojai, California ranch after the cheating scandal broke. They have to, since they’ll be promoting The Twilight Saga: Breaking Dawn — Part II in the upcoming weeks. Summit Entertainment has made it clear that no cheating scandal will take away from promotion of the movie.

Will the couple make it, though? Don’t bet on it.

“Rob just isn’t going to be able to get beyond the cheating — one time or not,” a source told People.