LisaRaye has an intriguing past, a fulfilling present and an exciting and promising future. Here this multi-talented single lady discusses trying to stay fit after 40, dating and younger men and what it was like being First Lady of Turks and Caicos Islands… 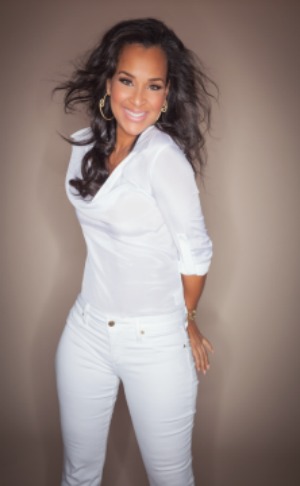 Kat: Having done both — scripted (Single Ladies) and reality TV (LisaRaye, The Real McCoy) — which do you prefer?

LisaRaye: I like and enjoy both. The reality is actuality and the fans feel like they can reach out and touch you, which makes you relatable. Scripted TV allows me to do what my craft is and that’s acting.

Kat: You were married to the Premiere of Turks and Caicos Islands. Outside of your ex-husband’s questionable character, what was it like being First Lady? What cool duties did you have?

LisaRaye: It was fantastic getting to learn the culture, the people, the country. I didn’t have a protocol person to tell me what to embark on. For the first year, I was going back and forth to the states because I was still filming my sitcom All of Us.

Kat: You must have been exhausted.

LisaRaye: Yeah, pretty much. When it’s new it’s fun. At some point I did say, what am I going to be about over here? So I invited my celebrity friends to Turks and Caicos to buy property and boost tourism. So I brought people like Katie and Tom over, and Will and Jada Smith, Catherina Zeta Jones and Michael Douglas so it became a go-to destination. I started a film festival with Jasmine Guy and opened a three-screen cinema there. Tourism increased by 41 percent when I was there. I did feel like kind of a fish out of water at first but being an actress really helped me to adapt.

Kat: Did you have to do any funky or trumped-up etiquette lessons?

LisaRaye: Oh yeah, I did that with my butler. He knew all about wine and cigars, and table settings. So I did an “Etiquette for Dummies” with him.

Kat: You always wonder what it’s like to be entertaining people in those kinds of circles, and everyone is looking at you as the esteemed hostess.

LisaRaye: Mmm hmmm. And when your husband is conducting business, it’s up to you to entertain the wives. If they’re socialite ladies it’s all about shopping and dining. And I would have preferred to have been sitting over there with my then-husband talking about business things.

Kat: Turks and Caicos is paradise. Do you ever miss it?

LisaRaye: I haven’t gone in a couple years. When Hurricane Ike hit the capital island I was able to go there and help. I’ve been back in L.A. rebranding and working. I did three years of my reality show and this is the second year of Single Ladies and The Real McCoy back-to-back.

Kat: On LisaRaye, The Real McCoy, you selected 10 different models to showcase your jeans, and after looking at butts all day, you choose a pretty diverse group of booties. Obviously your jeans aren’t just for size twos.

LisaRaye: Absolutely not and I’m glad because they already have a lot of jeans for those girls. I’m no longer in a partnership with PZI jeans. That deal went bad and we couldn’t come to an agreement, so I’m going to do a line on my own. So you gotta look out for that.

Kat: We will! You also have an a** that won’t quit! How do you stay in shape?

LisaRaye: (Laughs) I’m like everybody else. I have my go-to methods and my crash courses like fasting for detox. Routinely as I know I have a project coming up, I’ll start working out. But let me say this, the older I get, the harder it is to get it off. It takes longer now. I’m about to start this whole different lifestyle with eating and living healthier. I’m transparent enough to say, “Yeah, I’m a shapely woman but there are still things about me that I feel self-conscious about.” I’m about to do a 90-day challenge and really do some body toning, lean out and do some stretching. Maybe I’ll get an inch taller!

Kat: You say as you get older it gets harder, so may I ask how old you are? 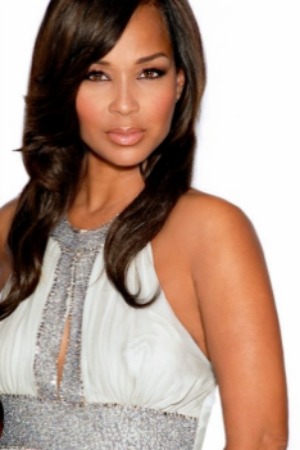 Kat: Once you hit 40, the days of skipping dinner a couple nights a week, jogging a couple more times and cutting down on red wine and seeing the scale drop by 5 pounds are over.

LisaRaye: I know. So we tend to start camouflaging. I don’t necessarily want to do that. I’m a fan of Spanx, but I don’t want to have to wear them, you know?

Kat: If it weren’t for shapewear, where would us gals over 40 be?

Kat: Your daughter is following in your modeling footsteps. Any words of caution or wisdom from Mom?

LisaRaye: I want her to do it the right way. I don’t want her to surround herself with people who are just going to blow smoke up her a**. I want her to be the complete package, not just a pretty face. I want her to get her body together, she’s a bigger girl — and she’s a curvaceous girl. And it wasn’t easy growing up with a mom who was always smaller, so I’ve always encouraged her to embrace who she is. Now she’s a bit more body conscious and she’s toning up her body as well. I refuse to have her use my name as leverage. She needs to get everything together on her own, and that’s what she’s doing. Education is the number one priority, not modeling.

Kat: You seem to have a real mind for business. Did your daughter inherit that?

LisaRaye: Ha! Not yet. She’s got a sense of entitlement and she’s a lazy girl. When she has a job, she’s very disciplined, but that’s when she has a job. I want her to have an extensive schedule. Life can’t just be about going to school and that’s it. To be successful, you have to be able to hold down several things. You’ve got to go to school, you’ve got to have a job, you’ve got to work out, you’ve got to know how to cook. Before I turn her over to society, I still have a little more teaching to do.

Kat: Are you dating right now?

LisaRaye: I’m not dating right now. I’m looking to meet my best friend, wherever he may be.

LisaRaye: Yes it is, Honey.

Kat: What’s your favorite and least favorite thing about dating?

LisaRaye: My least favorite thing is when these young guys come up to me and they’re like, “Oh my God. I always wanted to meet you. I remember when I was little and I watched you in Player’s Club.” I’m like, that doesn’t sound good. I don’t have the experience of being a cougar. I tend to like older, more established men. I’m attracted to power, of course. I have a lifestyle of my own, and I’m looking for someone who has a similar lifestyle, so we can be that much more powerful together.

Kat: When you’re in a relationship, what’s a deal-breaker for you?

LisaRaye: When I got divorced, I thought I knew this man. I’m a little nervous now. I’m going to have to get all up in your business before I do it again.

Kat: Do you have like a really detailed questionnaire that you submit to candidates now?

LisaRaye: No, I did marry my husband relatively quick and I knew nothing about the culture and it was very exciting and daring and I’m kind of a daredevil, so I was like, let’s do it. Now that I’ve done that, and I can put it in my past, the next time I’m going to do it, I’m going to do it right. I want to be in love. I want to be with my best friend. But before that, I want to know the concrete stuff. But it’s not like I have a questionnaire that says, “What’s your bank account? Is your mom up in your business? Do you want any more kids?”

Kat: When you say you didn’t know your husband and got married relatively quickly, what do you mean by that?

LisaRaye: He asked me to marry him a month after we met, it took us about six or seven months to plan the wedding, so that was our date/courtship time.

Kat: You’re stranded on a desert island, but you get to have three things from home. What are they?

LisaRaye: Ohhhhhhh. I was going to say my daughter, but if I’m deserted, I wouldn’t want to put her through that. I’d bring water. I’m going to need my cell phone so I can have someone come get me when I’m ready to get off the deserted island, and some food!