On the heels of Mitt Romney claiming that Israel’s cultural “superiority” accounted for the “significant disparity between Israeli and Palestinian living standards,” the author of the best-selling book Guns, Germs and Steel is slamming the presidential hopeful for “misrepresenting” his work to advance that inflammatory theory. 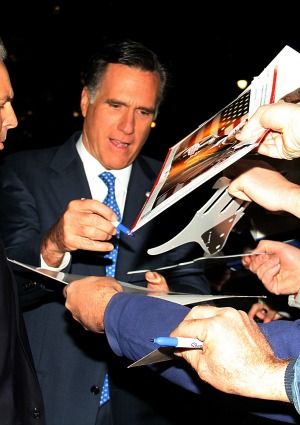 Scientist and author Jared Diamond’s name is abuzz on Twitter after he slammed Mitt Romney in a New York Times op-ed Wednesday for mischaracterizing his best-selling work — Guns, Germs and Steel.

“Mitt’s latest controversial remark, about the role of culture in explaining why some countries are rich and powerful while others are poor and weak, has attracted much comment,” Diamond said. “I was especially interested in his remark because he misrepresented my views and, in contrasting them with another scholar’s arguments, oversimplified the issue.”

Diamond is referring to comments the presidential hopeful made in an essay published on National Review’s online edition Tuesday.

In “Culture Does Matter,” Romney suggests “the choices a society makes about its culture play a role in creating prosperity, and that the significant disparity between Israeli and Palestinian living standards was powerfully influenced by it. In some quarters, that comment became the subject of controversy. But what exactly accounts for prosperity if not culture?”

“It is not true that my book Guns, Germs and Steel, as Mr. Romney described it in a speech in Jerusalem, ‘basically says the physical characteristics of the land account for the differences in the success of the people that live there. There is iron ore on the land and so forth,'” Diamond writes in the “Romney Hasn’t Done His Homework” editorial. “That is so different from what my book actually says that I have to doubt whether Mr. Romney read it.”

Diamond goes on to say that his focus was mainly on biological features — such as the different types of plants and animals — and the physical characteristics — such as continents’ sizes, shapes and isolation.

“I said nothing about iron ore, which is so widespread that its distribution has had little effect on the different successes of different peoples,” he said.

Diamond claims that Romney went so far as to “mischaracterize” Guns, Germs … in his memoir: No Apology: Believe in America.

If that’s the case, maybe Romney does owe Diamond an apology?

Diamond goes on to tear apart Romney’s “rationale” and, moreover, his use of Diamond’s own “comments” to substantiate that rationale, point by point in the editorial.

Before one thinks this is much ado about nothing in a politically electrifying environment, consider how advancing such comments by using real academics’ alleged theories can incite violence in an already powder-keg environment of the Middle East.

Considering this is also the latest in a series of overseas snafus that would make George W. Bush blush, maybe it’s time for Mitt Romney to go on an “apology tour.” Or just move out of the way entirely… Mr. Romney, you’re doing more harm than merely embarrassing us.