Melanie Amaro needs help and fast! Her debut single, “Don’t Fail Me Now,” has critics shocked. Take a listen and tell us what you think. 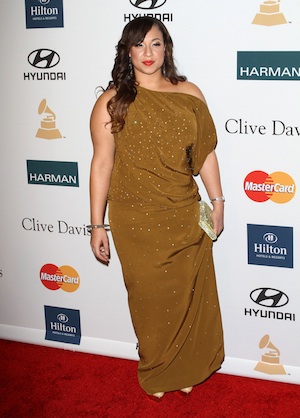 The X-Factor winner Melanie Amaro just released her first single, “Don’t Fail Me Now.” The track comes eight months after she won Simon Cowell‘s version of his highly successful X-Factor show from the United Kingdom. Unfortunately, the verdict is in: Amaro’s song is a total dud.

“Don’t Fail Me Now” is auto-tuned, which is a shame because Melanie Amaro has pipes. Her time on The X-Factor led to countless comparisons to Christina Aguilera, Mariah Carey and Whitney Houston. Amaro even covered many of those icons’ legendary songs — usually to standing ovations. The worst complaint Melanie received on the show was that she was a little boring. “Don’t Fail Me Now” isn’t boring — it’s just straight up awful.

With a recording contract worth $5 million and access to the best producers, how did “Don’t Fail Me Now” even make it out of the studio? I was shocked to learn Livi Franc, who has worked with Britney Spears and Kelly Clarkson, wrote the song and major producer Rodney “Darkchild” Jerkins produced it. What happened?

The song has potential. It seems like a perfectly good song in its first 10 seconds. The lyrics aren’t that bad. Yet, it seems to stifle the very best of Amaro. It limits her ability to shine. Even worse, “Don’t Fail Me Now” can’t decide if it’s a dance track or a ballad. I’m confused just listening to it — about one minute into the song the beat begins to rise as if it’s a club song, but at its peak it stops and brings in soft piano music. Huh? That’s the problem with “Don’t Fail Me Now” — it’s not Amaro’s voice that’s troublesome, it’s the production of the song.

The Los Angeles TImes seems to agree. Music critic Gerrick D. Kennedy writes, “More puzzling is this need to push Amaro into dance territory, which is currently overcrowded by almost every pop/R&B diva. It was never in her wheelhouse, something her team should have realized…”

“Don’t Fail Me Now” will likely be a forgotten single and disappear from radio airwaves as soon as it shows up this week. The cheesy single doesn’t suit Melanie Amaro with her powerhouse voice and classic style.

Listen to Melanie Amaro debut single “Don’t Fail Me Now” below. Do you think it’s a good choice?