The band members aren’t the young singletons they were when they formed in 1986. So how do you go on a world tour when you have a family? 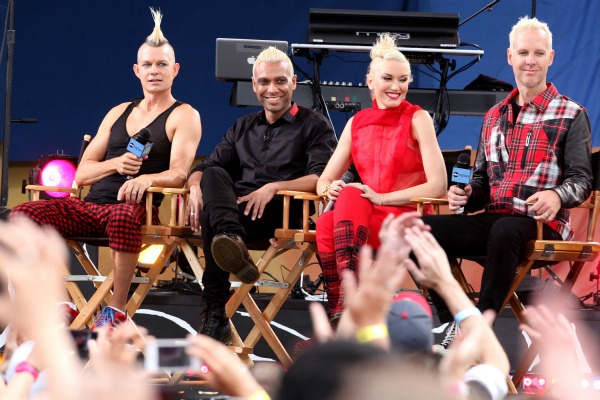 This year, No Doubt fans will get something they have been waiting for since 2001 — a new album from the band.

The band members are much older now than when they formed 26 years ago, and a touring and recording schedule is not as easy now.

No Doubt plans to tour behind the new album Push and Shove, but with each of the band members having a family now, the tour is something they have worried about.

“We’ll have to learn from Angelina and Brad,” lead singer Gwen Stefani told The Daily Mail.

When her son Kingston was a baby, Stefani went on a solo tour and she said that it was a difficult experience.

“I was nursing him for 14 months so I would nurse, go on stage and wake up through the night, and on the bus, and it was just like, ‘What am I doing?’ It was so hard, but it was amazing, too,” the 42-year-old mom said.

Stefani and her husband Gavin Rossdale have two children, Kingston, 6, and Zuma, 3.

Even the recording schedule was a tough one for the band, but they made it work.

“We were only able to get together three days a week and, because I had the kids, there was only a limited amount of time,” she said to The Daily Mail. “I was exhausted by the time I got there, so it was a struggle trying to weigh and balance everything out with the kids.”

The album has been anticipated by No Doubt’s fans, even after two solo records by Stefani in the time since No Doubt put out their last one 11 years ago.

But will Stefani leave the band again to go solo? When asked, she sounded doubtful.

“No, I don’t think so. I was always thinking of that as a moment in time and you can never say never,” she told The Daily Mail. “But these last couple of years have been overwhelming for me, with having so much going on, and my husband being on tour, and just trying to do it all, which is not possible.”

Push and Shove will be out in September. They have not yet announced their tour, but they will be playing the iHeartRadio Music Festival in Las Vegas Sept. 12.