That ultra-memorable scene in Top Gun, when the guys are all playing sand volleyball wearing tight jeans and that’s about it, is a distant memory when we watch Olympians Jake Gibb and Sean Rosenthal play beach volleyball on TV. 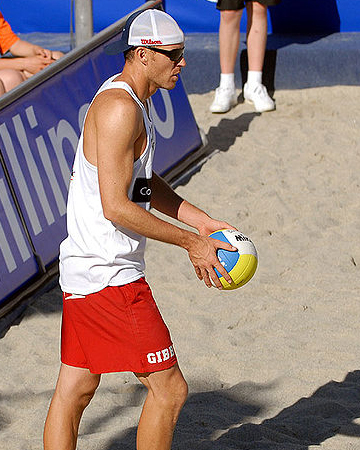 Those lean, muscular bodies, those nice tans — sign us up for doubles!

Why we love them:

Watching Olympic beach volleyball is exciting in itself, but when this pair is on the court, watch out — we can’t take our eyes off their moves… or their bods.

Move over, Ryan Lochte and Michael Phelps: Gibb and Rosenthal just might be the cutest Olympic teammates ever to grace a Games. They played together at the Olympics in Beijing four years ago, placing fifth after losing to Brazil’s Ricardo Santos and Emanuel Rego. This year, however, after only one loss, they’re still going strong in round 16 of the men’s beach volleyball semifinals in London, as of press time.

After their first game in London, Rosenthal tweeted this:

“First game in the books!!! Thanks for all the love and support for @JakeGibb and myself through this process. It’s amazing out here.”

We don’t doubt it, Sean!

They have strong spirits

In between Olympics, Gibb was diagnosed with testicular cancer in December 2010 (this, after he had a cancerous skin growth removed in 2004). Ironically, he wouldn’t have known he had testicular cancer if he hadn’t gotten a positive result on a drug test for high hormone levels that year. After he consulted with doctors, it was confirmed that he had cancer, which was responsible for the test’s positive result. Gibb thought he’d need three rounds of chemotherapy but ended up needing none after having surgery to remove his testicle, enabling him to qualify for the 2012 Games.

“I feel like I’m the luckiest guy in the world,” Gibb said in a statement. “To have my family and friends around me, and to be able to play the game I love [means] more than anything. And to be able to go back to something as big as the Olympics, after not knowing if I’d even be able to play again, is so … overwhelming. It’s hard for me to articulate other than to say I’m just beyond grateful.”

Rosenthal shared his thoughts in a statement:

“We really got to put volleyball in perspective after something like that. Volleyball is just a game,” Rosenthal said. “Jake is one of my best friends. He’s like a brother, and I wouldn’t be here without him. To get through something like that and turn around and play like he has is crazy. But I’m glad I’m on his team, ’cause as far I’m concerned, he can beat anything.”

They came to the sport at different times

Far from being career athletes with their eye on the gold from an early age, Jake and Sean found their love of beach volleyball at different times in their lives. Jake didn’t pick up a ball until age 21, but Rosenthal went pro at age 16 in Hermosa Beach.

That goes to show that you can succeed at any age. (Just ask 71-year-old Hiroshi Hoketsu, who’s competing for Japan in dressage in the London Games!)

Sorry, ladies! Gibb is spoken for. He’s been married to his wife, Jane, since 2000. The day before Gibb was scheduled to have surgery to remove his testicle, Jane told him she was pregnant. They’re now the parents of a son, Crosby, who is almost a year old.

As for Rosenthal, last we heard he was dating a fellow pro volleyball player — tall, blonde Jessica Gysin, 26. Whatever his official relationship status, he has a special cadre of fans in California’s South Bay who call themselves Rosie’s Raiders and are known to heckle the duo’s opponents. We’d probably have to fight a few of them for his number!