Oprah Winfrey lets her hair get crazy on the cover of the O Magazine September issue. Looking natural yet glam at the same time, the media mogul explains why she feels her best when she lets her hair down. 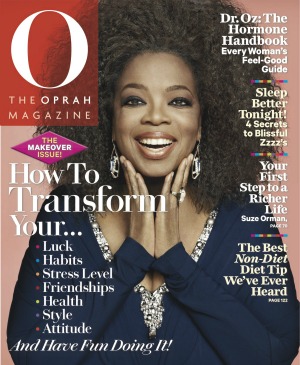 Oprah has said that she hated doing makeover shows, but the media queen has gone ahead and given herself a new look. Oprah let her hair go natural for the summer, and instead of looking messy it actually looks decidedly glam!

Sporting a long, curly ‘do on the cover of O reminiscent of the great Diana Ross, Oprah said she has long struggled with how to wear her hair and once even considered clipping it super short like Bill Cosby‘s wife Camille.

“I wanted to wear it close-cropped a la Camille Cosby but her husband Bill convinced me otherwise. ‘Don’t do it,’ he said. ‘You’ve got the wrong head shape and you’ll disappoint yourself.’ I took his advice,” she wrote in her column ‘What I Know For Sure.’

Oprah isn’t the only one who got a summer makeover. Her beloved doggies also get cool clips for the season — and she swears it changes their attitude just like a new look changes our own.

“I even notice a change in my dogs when they get their summer cuts: They’re friskier and livelier, feeling more themselves once the weight of the hair is released,” she said.

If you’re yearning for a new look yourself this summer, remember that the only makeovers that stick are “those in which something inside the receiver clicks, aligning with that which is being received,” Oprah said. “The only way to real transformation is through the mind.”

Of course, if you want to take the opposite approach and keep your naturally curly hair slick and straight through the hot summer months, O has a plan for that, too. In short: silicone hair products, a hair dryer and a good flat iron.

Go to oprah.com for more, and read the full column in the September issue of O, The Oprah Magazine, on newsstands Aug. 7th.