Finally! An answer as to why Victoria Beckham never smiles in pictures, straight from pouting Posh herself, courtesy of Glamour magazine’s latest issue. 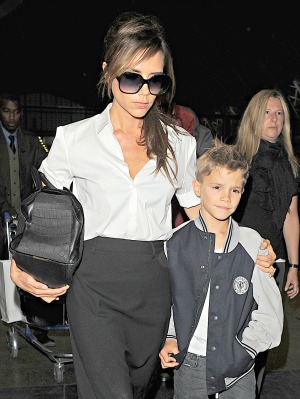 Why doesn’t Victoria Beckham ever smile in photos? After much speculation the mother of four is constantly miserable, it turns out it was fashion that has sucked all the outward happiness of the designer.

Pondering her own propensity to pout, Victoria Beckham told Glamour magazine, “Do you know, I don’t know?! I actually used to smile a lot in pictures.”

Victoria Beckham loses her head — and her kid >>

The fashion designer, who was honored to serve as the first-ever guest editor for the September 2012 issue, continued with a laugh, “I think I only stopped smiling when I got into fashion. Fashion stole my smile! I’ve created this person. And I’m not saying that’s not me, but I wouldn’t say that’s the whole me…. It’s an armor that goes up.”

Victoria Beckham, seen here with trademark Posh pout alongside son Romeo on Tuesday, wants to be happy — in fact, that emotion is an important part of the Beckham family five-year plan.

“I’d like everybody to be healthy and happy,” the 38-year-old, also mother of Brooklyn, Cruz and Harper with husband David Beckham said, dreaming of their future.

“I’d like to be growing the business at a steady pace, and to be making more women feel empowered, beautiful, and confident. And I’d never say never about another baby. It’s a juggling act—a career, family, a husband who’s busy. But I’d never say never!”

For now though, she’s smiling behind the scenes, enjoying her turn taking part in Glamour. Of the guest editing opportunity Victoria Beckham shared, “It’s been exciting for me to see my ideas come to life, from type colors to photo selection to casting. I even made my own list of Glamour fashion Don’ts to keep out of the issue: boat shoes (unless of course you’re designer Alber Elbaz or on a boat!), Bermuda shorts, nose rings, Crocs, and American tan tights (that’s nude pantyhose to you).”

It’s a shame we don’t get to see the beautiful Victoria Beckham beaming more often, don’t you think?