Another day, another famous person tweets something stupid and it goes viral. Well, Twitter has some competition in the controversy department, now that a WWE wrestler is catching heat for comments he made on Tout. 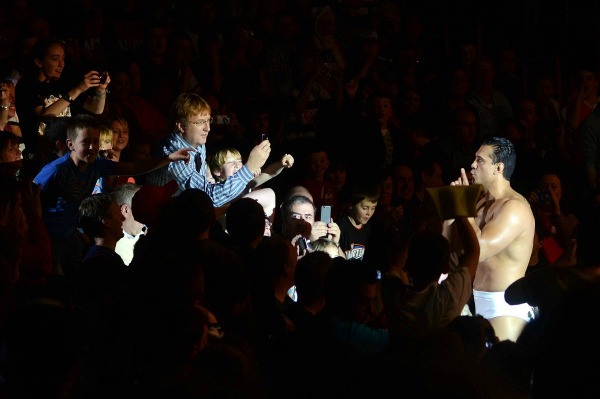 If you don’t know Tout, think of it as “video Twitter.”

Instead of “tweets,” those vids are called “touts.”

Perhaps most famously, Shaq touted out his retirement on the site back last summer.

World Wrestling Entertainment, which has a stake in the company, has also been encouraging its talent to upload “touts.”

But it may want to rethink this decision, after wrestler Tensai (legal name: Matt Bloom) records, presumably enroute to a wrestling gig, that it’s “very very dangerous to drive with a Japanese person.”

He then commands “personal chauffeur” Sakamoto to “open” his eyes.

As of Wednesday morning, the tout had gone MIA.

WWE issued this statement: “While in character, Lord Tensai (Matt Bloom) clearly took his storyline too far and he will be reprimanded for his inappropriate comments.”

This statement sounds suspiciously like one the company was forced to make after one of its entertainers, Abraham Washington, said another wrestler was “”like Kobe Bryant at a hotel in Colorado … unstoppable.”

This statement obviously referred to the basketball star’s Colorado rape trial from 2003.

Be it Twitter or Tout, do you think the backlash — not even so much the comments — is becoming a bit much?

Are we fast becoming the Outraged States of America?