Maybe former fatty Karl Lagerfeld’s lack of nourishment is making him crabby. Because earlier this year the fashion designer said Adele had a “pretty face” (we all know what means!). Now he’s saying that Pippa Middleton has the opposite problem — a face best viewed from behind! 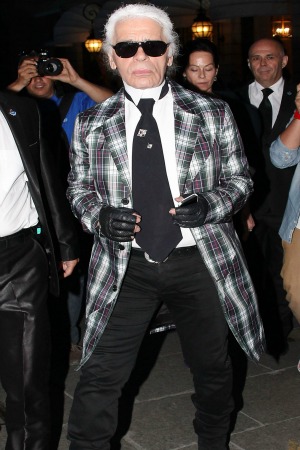 Now the King of Mean isn’t being so polite with Kate Middleton’s sis, Pippa.

In an interview with U.K.’s The Sun, Lagerfeld praised the Duchess of Cambridge.

“Kate Middleton has a nice silhouette and she is the right girl for that boy,” he said, oddly referring to Prince William as “boy.”

But, when it came to Pippa, he didn’t mince words.

“On the other hand, her sister struggles,” the German-born designer quipped. “I don’t like the sister’s face. She should only show her back.”

(!) There is one way in particular that this statement is totally, utterly just wrong. It’s emerging from Karl Lagerfeld’s pie hole.

If ever there was a person who has no right to call out another individual for his/her face, it would be this designer. While very much alive, he looks like he’s been dead for some time now. Seriously, look at that mug! Someone bring me some garlic and a stake because we’re pretty sure we just saw Karl turn into a bat.

The only thing we can agree upon is Pippa’s famously awesome arse. She has every right to flaunt the butt that made her a household name.

As to Karl, he needs to stop showing his arse with such inane comments.