It’s been almost three weeks since Steven Tyler announced he was leaving the talent show. And, contrary to reports, the rocker is blaming his American Idol departure less on disgruntled band mates and more on the producers of the show. 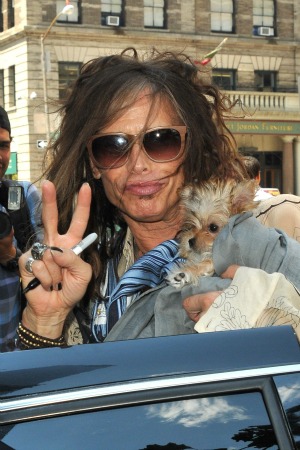 Shortly after Steven Tyler announced he was leaving American Idol after two years on the show, reports surfaced that Aerosmith gave the frontman an ultimatum: Us or the show.

Now, the 64-year-old rock icon is telling Rolling Stone that the show was “not my cup of tea.”

He tells the magazine that producers needed a Simon Cowell-like replacement.

Tyler was supposed to be that “mean judge.” But he couldn’t play the “mean guy.” Awwww!

“The show’s about kids and what you do to nurture their talent,” Tyler said, by way of Rolling Stone. “They wanted me to take the piss out of the kids and I don’t have that in me.

“That’s not what I’m about,” he continued. “That’s more about that other guy. Not me.”

Aside from the perks of making “a ton of money” and sitting “next to J. Lo,” Tyler’s impetus for joining the show appears to be Aerosmith — not the other way around.

Tyler admitted he signed with Idol in 2010 during a nasty public feud with his other band members.

“It was something to do while the storm blew by, to be honest,” he told the magazine.

Perhaps no one is more relieved that Tyler is no longer pulling “double duty” than guitarist Joe Perry.

“There was certainly the fame and notoriety that went with it. But you can’t figure out what a band is about reading about it in the gossip column,” he said.

The band appears to be going full-throttle now, with its Music from Another Dimension! album coming out in November.